Hello, Kali. — The Other Side of Anger. 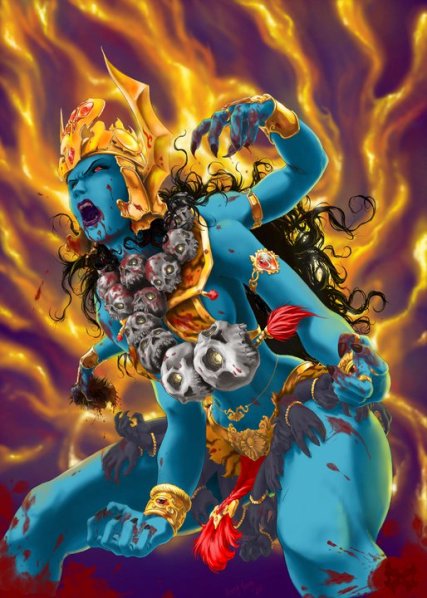 “Next time you’re mad, try dancing out your anger.”

Lately, I’ve been pondering the ways in which we tell ourselves stories – both personally and collectively. We construct, analyze, and deconstruct our narratives.

I realize I like to tell myself sad stories.

Ironic coming from a woman who has a raucous and often raunchy sense of the ridiculousness of life and how I’ve lived it.

The truth is, I am definitely not living a sad story.

Still, my tendency is to implode rather than explode. I simmer rather than rage. When my boundaries are violated, I am typically unable to muster much of a reaction, no matter how wronged I feel.

It is only later, after I allow myself to experience the scrape of an imaginary boot against my face, that I feel even a slight bristle of anger. This delayed reaction is usually followed by the more socially acceptable emotion (in me, at least) of sadness-paralytic depression-excuse-me-while-I-blow-my-brains-out-don’t-worry-I’ll clean-up-the-mess sort of chat.

“This is the woman who’s renting my condo,” my ex says as he introduces me to a small crowd of his friends.  He’s still as lanky and awkward as he was when we first met.

Some history. Ted and I met in homeroom when we were twelve.  He was my high school sweetheart. I was the first woman he ever slept with. We were lovers off and on during our twenties; estranged for most of our thirties; then lovers again; and ultimately, in the two years leading up to this moment, we’d settled into something akin to friendship.

I feel stung by his words.

Seriously, he did not just introduce me as his “tenant,” did he?

As a good girl, I learned to see anger as a toxic, nuclear-winter-type emotion.

In our house growing up, not only was anger not allowed, it was also not acknowledged.

Nothing could possibly rile us up enough to constitute a reaction that burned with anger; there was no hurt that could possibly scratch that deep. I remember feeling a sense of real confusion when I found myself angry as a child. Anger existed. I knew that much. But no one ever acknowledged it.

So, I learned to implode.

It was the only acceptable response to upset in my family. We seethed, savored, swallowed and actively digested our rage.

There were good reasons for this. My mother grew up terrified.

For her, rage repeatedly resulted in her father knocked out and bleeding on the living room floor while her mother wept. (Her younger sister once walloped him with a cast iron skillet for trying to throw Nana, who was pregnant at the time, down the stairs).

I learned firsthand about Granddad’s anger when I was about seven. I watched helplessly as he violently kicked our family dog in the middle of the driveway. He claimed she was barking too loudly as she waited for her dinner. The reality was, Granddaddy was pissed off, and the dog was a convenient available target.

I admit, I’ve fallen in love the Hindu Goddess of Destruction. Kali.

Now, there’s a bitch worth her salt.

Kali wears a necklace made of skulls. Her skirt jangles with femurs and calf bones. She devours and impales and shimmies, her snake-like charm mesmerizing and hypnotic.

Kali’s my kind of gal. I think I’ve taken her as my personal mascot, a purely zero-to-sixty reaction to stuffing anger my whole life.

One of the many things I loved about my last boyfriend, Michael, was his ability to remain calm in the face of my subterranean fury. He used psychological techniques to get me to spit out how I felt.

“That he’s an effing useless piece of shite!”

We’d continue this call and response technique until I felt my pulse start to slow.

Mike talked to me in such a way that I could allow my hurt – the hurt that invariably exists under the rage – to come forth.

So, I wander back to the notion of the importance of our personal narratives. What is the story I tell myself?

Cinderella. I am the little cinder girl sitting on the hearth, sifting ashes. In my version of the tale, I am not responsible, not taken to task, not expected to stand up and use my voice.

That is the powerless version. My crutch. That is the story that I need to pry out of my hand and finally let go.

The acidic but completely unvarnished truth?

I’m a bitch, a teacher, a wounded child, a poet, a writer, a storyteller.  I am a woman on the verge, a crazy maker, a cat lady, a feminist, an artist, a sloth, a lover, a fool, a bookworm, a political junkie, a workaholic, a lost soul, and a spiritual seeker…

And you know what?

We all are. We wear coats of many colors. Not everything is PG.  Not everything is suitable, correct, or upstanding. The point is, can we allow ourselves to be swamp creatures and hellions and honest to Goddess she-wolves howling at the full moon, without judging those things as off-limits or wrong or beneath our station?

Each person is a mysterious forest of both seen and unseen elements. I think there is a dark river that runs through the core of our lives. And there are gifts in that darkness. That boiling soup contains things we need to learn.

I wonder if the reason peace is so elusive is because we never actually confront what’s made us angry.

We napalm the symptoms instead of digging up the root of what’s wrong. We blast and rage, but we don’t go in search of that screaming, broken part of us, that simply wants to be picked up and held, and told, in no uncertain terms, that she will be okay.

I circle back to the notion of female, Kali-inspired empowerment. These days, I want to own my space, to stake out my spot on earth and nail it down.

I severed my pathetic friendship with Ted (what was left of it) not long after his “woman renting my condo” introduction. Two weeks after that, after moving in with my mother, my father died of a heart attack.

I suppose some might look at that pile up as punishment for having delineated a boundary, but I didn’t see it that way. Instead, I loosened and released a cosmic hairball.

Like a big cat, I hacked away at it until I finally cleared my throat.

Ten years later, I am lush with low hanging fruit. In my daydreams, I hear the clinking rhythms of a Bollywood musical number rising up around me.

I am fully present and grounded in my body. I turn, and there she is, her blue face shining with light. We embrace. I taste the orange zest of her tongue as we dance and kiss and swallow the whole world.

We meet. At last.

Big Mammu, Mischief Maker, and Chief Creative Contessa at Shavawn M. Berry, LLC
Shavawn M. Berry’s work has appeared or is forthcoming in The Huffington Post, The Good Men Project, elephant journal, Olentangy Review, Black Fox Literary Magazine, Be You Media Group, Vagina – The Zine, Rebelle Society, The Cancer Poetry Project 2, Kinema Poetics, Kalliope, Poet Lore, Westview - A Journal of Western Oklahoma, Meridian Anthology of Contemporary Poetry, Concho River Review, North Atlantic Review, Synapse, Living Buddhism, Blue Mountain Arts/SPS, and Poetry Seattle to name a few. Her technique essay on the dramatic monologue/persona poem is featured in a poetry database published in 2013 by Ebsco Publishing. In 1998, she received her MPW in Professional Writing from the University of Southern California in Los Angeles where she specialized in Creative Nonfiction and Memoir. Ms. Berry teaches writing online for Arizona State University where she has won numerous teaching awards including a 2013 Lincoln Ethics Teaching Fellowship. Since 2014 she has been mentoring student interns through the Pen Project, a writing and editing internship offered by Arizona State that allows students to critique and offer feedback to incarcerated writers in Arizona and New Mexico. You can read more of her work on her blog, The Wonderland Files, via her website. A portfolio featuring a selection of her essays, blog postings, and prose is available at Contently.com under her name. You can reach her via her Facebook page where she chats with like-minded, open-hearted people. She loves animals of all kinds, nature, the ocean, the desert, travel, the southwest, and most particularly her new home, in Santa Fe, NM. She offers creative coaching, writing webinars and workshops, and retreats through her website.