How Yoga Saved My Relationship… With Alcohol. 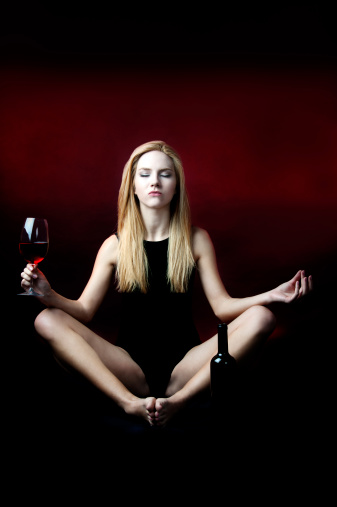 I was a rather late bloomer when it came to drinking alcohol.

I did not drink in high school and didn’t really start drinking consistently until my sophomore year of college. Even then, I did not partake nearly as heavily as my fellow peers.

As time went on, however, my occasional weekend parties turned into making myself a drink at night (almost every night) to unwind after a long day of school or work. Graduation came, and the following summer was ripe with opportunity to indulge. On top of that, I began working at a bar, and as everyone who has worked in the service industry knows, it truly is part of the job.

With a family history of addiction, I knew the dangers. I told myself I would catch myself before it became a problem, and as far as I knew, there wasn’t one. Yet.

I got my first big girl job six months out of college, and having what I saw as more disposable income, as well as freedom, my weekends became chock-full of bar hopping, concert attending and house parties. Everything still seemed to be under control in my head, until a year later… when life kicked me in the ass.

A broken heart — we all know it too well. We each know how the pain manifests within us and how we tend to cope with sadness, fear and anxiety. I took to drinking, as I always did, but I just saw the massive increase of usage as a temporary part of the grieving process.

Family members expressed concern, but everyone else was telling me it was okay. And I believed them, and myself.

Showing up to work several days a week with hangovers I would never wish anyone to endure became a common theme in my life. I drank water, took some ibuprofen and pressed on, continuing the cycle the following night.

My drinking became a habit. I reached for a drink in every situation in which I found myself — at a bar with friends, at an event with strangers, at a family function, in the recording studio, at home alone.

I did not know how to just be, without alcohol swimming through my veins.

Another year passed by and before I knew it, it had been 365 days since my heart experienced that universal feeling of brokenness. I don’t know if it was the anniversary, or the new moon, or the coming of spring or a combination of a thousand factors, but I sensed a transformation was in order.

I was finally ready to start facing the pain, truly feel it and study my emotions instead of distracting myself through booze, career, friends, etc. In an instant, I changed course.

With this, I took up Yoga. From prior experience, I knew the opportunity the practice could give to me if I committed to it fully in all aspects — physically, mentally and spiritually.

I became more dedicated and more aware with each session, and I felt a slight release of my emotional pain as time went on.

Without even planning it, alcohol was quickly escaping my life and my mind.

At one point, I realized it had been two weeks since I had a drink. I had even gone out to bars with friends and chose water over vodka. I chose going home early over staying out to the point of exhaustion. I chose Me.

I have always been a tad socially inept, and when I am out with people I do not know or when I am in situations I’d rather not be in, I feel the need to be someone else, to be more free, and I do that through multiple cherry vodkas with Coke or several glasses of wine. Now, with Yoga being a part of my daily life, I do and see things differently.

Yoga teaches you to breathe into discomfort and to recognize your sensations. It teaches you to notice your fears and your aches, acknowledge them and move on. This is a wonderful practice anyone, myself included, can utilize when dealing with any struggle, alcohol abuse included, when you’re off of the mat and in the real world.

When I’m standing around at a club or event, water in hand, feeling as uncomfortable as all hell, I notice it. When I’m having sober conversations in a not-so-sober environment and I long to be as drunk as the person I’m talking to, I acknowledge that. I take note of it. I sip my water. I laugh at myself and at my surroundings, and I move on.

If I find myself in a situation where I feel that I will fall back into my pattern, I leave.

At first, I saw this as weakness. I saw my walking out of a concert early because I felt naked without my usual tipsiness as being a failure.

But through time, through gentleness and through my practice, I’ve seen that sometimes saying No and walking away from uncomfortable circumstances can be the strongest and healthiest thing we can do for ourselves and for others. If anyone else doesn’t understand that or has a problem with it, then they aren’t right for you or for your life at that time.

I sip my beverage, I enjoy it, I appreciate every last drop. I follow it up with several glasses of water and a great night’s sleep, waking up in the morning feeling refreshed and ready for my 9 a.m. Yoga class.

Chelsey Engel is a soul/blues musician in Pittsburgh, PA, who also works full-time in communications. She has recently developed a deep relationship with Yoga and tater tots. She first entered the world of Buddhism in her senior year of college when she, like most soon-to-be graduates, experienced an existential crisis. You can find her on Twitter or ChelseyNicoleMusic.