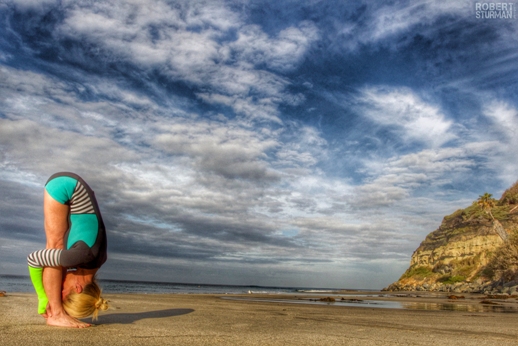 “Show-off,” whispered the girl on the Yoga mat next to me as I came out of my forward fold. “You’re kidding me, right?” I said. The Yoga teacher politely shushed us and the class continued.

Totally distracted from my normal only on my own mat persona, I silently sent her prayer. Thankfully compassion and understanding was my first response. As I moved through my day, though, I continued to think about her and was sad — and angry.

Angry… because I was angry. That isn’t usually a part of my day. As someone who once suffered from PTSD (and was treated, thankfully), I can testify I have worked very hard to surround myself with loving, supportive and magical people.

I have zero tolerance for this type of abuse in my world, especially in a Yoga class.

The reason I have chosen to write about this here, though, is that I did post something on my Facebook page and a very interesting conversation began.

Privately through messages and in person at my favorite Sunday morning Yoga class on the beach, many women shared that they, too, have been verbally attacked in a Yoga class. What’s up with that?

On the flip side, the positive thing is that friends who are Yoga teachers have said this has opened up a great amount of discussion. Searching for answers, I questioned a friend who is a psychologist, and her friend who is a therapist, about this subject.

I found the answers disturbing. Both suggested that this woman felt threatened somehow, and the cause of it stems from our DNA’s need to reproduce.

These two professionals said that most women are still trying to separate themselves from other women so that they can get and/or keep a better male who is going to protect and provide and father their children. They both agreed that it didn’t help that I didn’t have a wedding ring on.

Wow, I understand that we live in a patriarchal society that has cultural norms that shape and define our worldview, but I was shocked to learn that we are just one step away from some primal need to attack our own gender. This made me very sad.

So what if I would’ve said to this woman, “I don’t want your man and I don’t need his seed!” Okay, so I digress. You have to inject some kind of humor into this situation just so that the apathy doesn’t bring you down, right?

What I did say to the woman at the end of class was that the reason my forward fold is so advanced is because I’ve practiced Yoga for a very long time, and the reason I did so is because I had a bad back.

Sure, I could’ve been a jerk and said, “Surely you wouldn’t be jealous of the bad back, would you?” Thank God I didn’t say that though, because the woman said, “I wish I could do that too.”

Wouldn’t it have been wonderful if she would’ve said this in the first place? We have to remember that a lot of people come to Yoga with a fitness mindset and are unaware of the spiritual, emotional and mental benefits.

Even if they are not going to grasp all the subtleties of the practice, it’s still important not to talk down to people. This woman really needs to be in a Yoga class. It’s our honor and privilege as Yoga teachers to help and serve everyone — from beginners to advanced levels.

Stored emotions can be trapped in the hips. The following three hip openers might be just the ticket for this type of student. My top three picks are:

You can also do this pose is with blocks. If you are ultra-tight in the hips, then just having blocks underneath the knees and letting them rest there is the best way to start.

Let gravity work for you. As the hips start to open, try to see if the knees can reach further towards the ground.

Then, move forward from the pelvis and lead with your heart. Ideally, the back should be straight, but some bend or rounding in the back can be expected from beginners.

2. Kapotasana (pigeon pose): Nothing beats the good old pigeon pose for stretching the hips. Some teachers start by moving a leg forward into a lunge and bending and straightening the knee a few times to warm up the hip.

When it comes to pigeon pose, the closer the leg is to a right angle, the more intense the stretch. The closer the front foot is the opposite thigh, the less intense.

I usually prefer to start somewhere in between the two, but again, if you are ultra-tight, start out with less and gradually see if you can get to more.

If you can’t get the front leg to touch the ground, then a rolled up blanket, towel or even a block may be very helpful to place under the front leg.

3. Malasana (garland pose aka the squat): Start with wide legs (wider than hip distance) and turn the feet out to the sides. Slowly start to come down in the squat.

If doing so causes the heels to leave the ground, then place a rolled up towel or blanket underneath of them. You can also roll up the top of your mat and see if that works.

Once you are in the squat pose, some people slowly move around. I like to rise up a bit and then perhaps go a bit lower. I may also shift my weight from the balls of the foot to the heels.

Again, though, use caution if this is the first time you have done this or have very tight hips.

Side note: Heart openers are perfect for this type of person. I know I needed them after meeting her. Try bridge pose and/or camel pose.

Has someone hurt you in a Yoga class? If so, I’d love to hear about it. Namaste!