Hunting Blind (After The Majestic). {fiction} 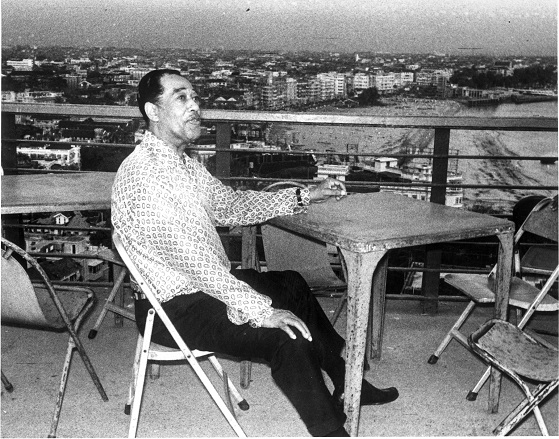 I lived with my mother, and after she married another man, she bore two more boys who were my brothers because we shared her. My father came to our house quite a bit, often in his police car, which was exciting. It wasn’t as if we were separated from him.

He was one of the first black farmers in Twinsburg, where he kept turkeys and pigs. Every Monday in November, we got a turkey. He had a smokehouse, too, and when it came time to slaughter some of the fattening pigs, he would do that himself. He castrated the male pigs a month beforehand. We would have bacon and ham all winter and into the spring.

My father often picked me up Friday and Saturday nights to help him forage for feed. We drove up and down Euclid Avenue, on the south side of Glenville, from E. 110 to E. 95 Street, picking up refuse from the barrels and dumpsters behind the many clubs and restaurants on the strip.

He would stick his hands into the slop and feel around the mash before filling up our barrels.

“Pigs will eat anything you give them. They can be stinky and filthy, even though their sausages smell great. I would rather cut myself than injure my animals.”

When our barrels were full, we drove the pick-up to his farm. The pigs would hear the truck coming and know it was time to eat. They would start doing what pigs do, getting greedy and feisty. He would dump their food in the trough and they would go at it.

That was why, knowing how they behaved, he picked through the slop, because they would have cut themselves, biting into anything.

I stopped gleaning slop when my mother told me I had to start being careful about hurting my hands.

I learned more sacred music and fewer blue notes after my mother put me in Empire High. Miss Bishop, my music teacher, had been there since the school opened. She had a nice hourglass figure, and the only thing that gave her away was that she wore old lady comforters. But, she was spry and walked fast.

She was an old maid because she had become a teacher and couldn’t marry, and by the time that idea changed it was too late for her. One afternoon I found a dedicatory book for Empire, which was built in 1915. I took it to Miss Bishop’s office.

“I see your name in this book, and your picture.”

She looked at me.

I’m sure she wanted to pinch me.

But, Miss Bishop made sure I practiced my piano and later helped me get a scholarship to Ohio University, where I studied the organ. After that I never lived in Glenville again.

I lived in Chicago, New York, and Boston. I learned to live alone, like Duke Ellington, who said music was a mistress. I lived in my own world, detached, so I could practice. I had friends who kept me in tune, but on Saturday nights I didn’t go anywhere. I had to be ready for Sunday services. That kept me out of mischief.

I tried it a few times, but it’s bad when you’re not feeling well in a church setting. I decided I had to do it alone.

I saw little of my mother, who had moved to California to live with my brother, a minister, and my father only when I was passing through the Midwest on my way to Chicago or St. Louis. We visited and had lunch at one or another deli in Cleveland Heights, where all the Jews had moved. Pirkle’s Deli had burned down.

My father was an industrious man his whole life. When he retired and his wife passed on, he bought the last commercial building, next to Whitmore’s Bar-B-Q, on Kinsman Road before it snakes up into Shaker Heights. It was a barbershop and beauty salon, and he lived upstairs in a one-bedroom apartment.

He could have lived in a house, since he owned five of them, but he didn’t want to.

“I don’t want to get too comfortable because I may not be here long.”

His apartment had one bedroom, one bathroom, and one closet. It looked like no one lived in it.

He was industrious, but he became a less tidy custodian of his properties over the years. He would patchwork instead of getting things done the best way, so they deteriorated. He wasn’t willing to pay the price to get things done the right way. When you have that mindset, you end up losing more money than you spend.

He lost his eyesight while he was visiting my brother in Texas. He stepped on a splinter, and after a few days, his big toe got infected. He had surgery for it, but in the end, they had to amputate the toe. Afterwards, he lost feeling in his leg. While he was still in the hospital convalescing, he woke up one morning and had gone blind.

He stayed in Texas for a month, and when he came back, he moved in with my sister on his side, who took care of him.

He never recovered his eyesight, which was hard for him because he had always lived by his senses. The biggest problem, though, were the hallucinations he suffered, which were part of the side effects from medication he was taking. He would have them at night. He heard things and saw craziness and wasn’t able to sleep.

I never got my father and mother together, even at the end, when I was staying with him, playing old jazz records together. He listened to music all day towards the end. He stopped eating, drinking cold lemonade, instead. The last time my mother visited us, my father was near death.

I took her around to many of the places in Glenville that weren’t there anymore, and tried to get her to go to the facility on Rockside Road where my father was. She fought me all the way, and in the end wouldn’t go.

She just didn’t want anything to do with him.

My mother, Olive, and father, Abe, did what they had to do. I was just a cameo on that team of theirs. When my father died, there was nothing left to do in Glenville and I moved back to Boston for good. In the summer, I play jazz and popular tunes in clubs on Cape Cod.

On Sunday mornings, when the weather is good, I brew a pot of strong coffee and microwave a plate of spiced hot cross buns. On my balcony, sitting in the warmth and light of the rising sun, I look for what is behind the brightness, on the other side of it, the blue note side of the Majestic my father peeked out of to spy on my mother.