Learning How To Shift Our Anger Out Of Overdrive & Into Freedom. 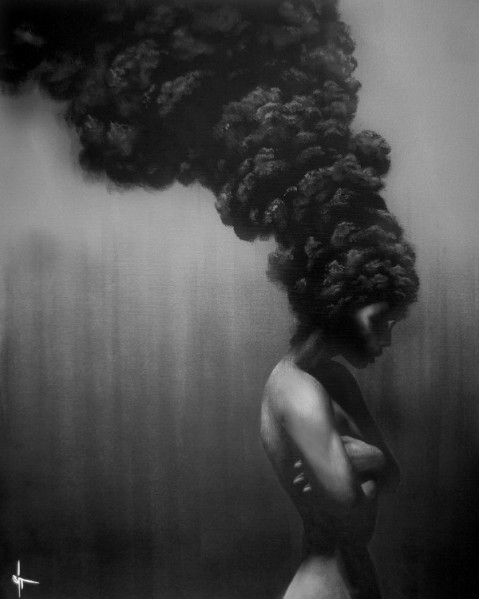 I am a complete jerk on the road.

While I have never engaged in road rage, I have raged plenty on the road in burning insults and strings of searing epithets that I cannot help but recognize as an inheritance from my father.

I always believed I was most like my mother: cheerful, determined, optimistic and rational. My workaholic father left few traces of himself as I grew into an adult, so my inheritance from him never registered with me — until he moved in with me a few years ago.

My dad and I share the height of long, skinny legs and the depth of dark eyes and hair. Only I, out of his five children, grew tall, not his six-foot-four but my five-foot-eight, which counts as tall on most charts for women.

Certainly in junior high school, when all the boys barely broke five-foot-two still, I towered above the rest, having gained all of the height my dad gave me by then, all but a couple of inches I mustered up in high school.

But the genetic transfer does not end with height and skinny legs. I have his temper.

My dad will be the first to admit he has no patience. He has definite opinions about how others should conduct themselves, exacting standards. Driving, for instance.

A frequent scene driving with him, I can picture him seething at a car slow-cruising in the fast lane, the one that he vehemently declares the passing-only-lane, letting the colorful language fly as he bemoans his obstructed freeway fate.

My father’s entire colorful array of profanity fully blooms in a car. And when I sometimes catch myself agitatedly driving, all the curse words I know fly from my mouth in explosive, frustrated disdain if cut off or otherwise disrupted from the oblivion of my driving trance. I transform from human to monster.

Comedian Louis CK does a funny bit about people in the safety of their cars screaming at other drivers. He remarks with astounded expression, mouth agape and eyes bulging, something to the effect of:

Can you imagine being in an elevator and bumped by the person next to you, just as you would have been bumped had you been forced to brake or swerve because someone cut you off, and then turning to look that person in the face, mere inches away, and shout, “I hope you die!”?

I laugh sheepishly at that routine. I have been that momentarily crazed person shouting in my car. And while I practice Yoga every day and meditate, calming my disposition for the day’s travels and travails, and read whatever helps me become more balanced in an imbalanced world, something possesses me when I get in a car.

I know habit has a large part to do with it, but I am nevertheless surprised at the ferocity of my anger the moment I encounter a perceived slight on the road: it rises in a flash hotter and more suddenly than those that plagued me for years before menopause.

It feels like a siege, as if I have no control over an acid-spewing alien cocooning inside me that bursts from my guts and spews terror.

And when I have just spat aloud from clenched teeth the words: “You f#@*ing asshole!” with venom, I immediately catch myself, just as automatically as the words that flew out of my mouth, “What is wrong with you?!”

Therein lies part of the problem: not the knee-jerk flying foul language and anger triggered by insignificant, impersonal lane encroachments, but the counter-reaction of self-berating. It does nothing to change the reactive fury.

Not that I condone the behavior, the lack of control in the face of something so irrational and trivial. Like any bad habit — smoking, nail-biting, leg-shaking (all of which I have had to beat) — the behavior masks some other neglected need, some other unattended emotion, unhealed wound, stewing conflict or ongoing unresolved problem.

When we lash out at the unknown other out there in the world, someone we have reduced to a concept, a negative speed bump in our lives, whether that be the generic bad driver (which most often is the merely inattentive driver), or the reviled driver more specifically denoted by gender, ethnicity or IQ, we do so because we are isolated, and not just in the safety of our cars.

We are closed up inside of ourselves, removed from our innate artist’s eye able to see the details of others. I know this. Who cannot memorize the lines in his mother’s face as she sits paralyzed placid in her wheel chair or the dimples in her babies’ knees?

Years later, we can remember the look on someone’s face, the howling grimace forming as he hears the horrifying words no one ever hopes to hear.

The mind can see if allowed to.

If we can see others, the glint in their eyes that signals fear or excitement, we can see ourselves, our own pain and joy. Empathy, I have read, is hardwired in us. We inherited it from our forefathers and foremothers living in caves within the protective survival of communities. Our roots are social, cooperative and communicative.

Our needs and desires wrap themselves in and around others, when we keep them close.

The distance we create between ourselves is learned, I believe, habituated with responses that become ingrained, and so feel natural. But the truth is, when I or anyone gets angry in the bubble of a car, that anger derives not from tangled traffic, harried lateness or enervated fatigue. No, the direct result of separation leads us to anger.

Most probably that separation is the cause of our anger at that moment, an anger grown from loneliness and alienation evolved from having been mind-severed from others so long ago, before we were born, before our parents were born, the ones who taught us our expressions of anger and love, and gave us the traits we smother or enhance every day.

We resent the loss.

I am merely an armchair psychologist, sociologist, and anthropologist. I carry no credentials in these studies. But I have lived for five and a half decades, some of them with eyes and mind wide open. I am my own best friend and worst enemy when it comes to witnessing and judging.

So when I go from 0 to 60 in seconds on the rage race track, and then condemn myself, I know those behaviors are unproductive: an agitated state makes anyone a danger on the road. But more importantly, an unconscious reaction lacks compassion, thereby inducing repetitious behavior in unacknowledged recurring patterns.

We all do that. Guilt ourselves for our transgressions, our flaws, and such judgment makes us feel shrunken, ineffective, and so, demotivates change as we turn away from ourselves in shame.

Change comes from active awareness of our material being. If the scientists’ and spiritualists’ postulations resonate truth, we are all part and particle of the same starbursts, the same matter that existed eons before us, made us. Our DNA that shapes us is shaped similar to that of the earth’s flora and fauna.

Whether our individual components — genetic or nurtured — make us tall, short, dark or light skinned, good drivers or bad drivers, even-tempered or hot-tempered, we are all respiring sentient beings that matter, are matter, both divine and profane.

When we forget that, we other-ize, sense the loneliness of that disconnection, and get angry. And that’s okay. Eventually, we shift sight, change gears to lower breathing rpm’s, and recognize ourselves as the freeway, the one leading us all to the same exit and on-ramps.