“What Will You Choose?”: Combining Fierce Compassion With Tenacity And Action In Croatia. 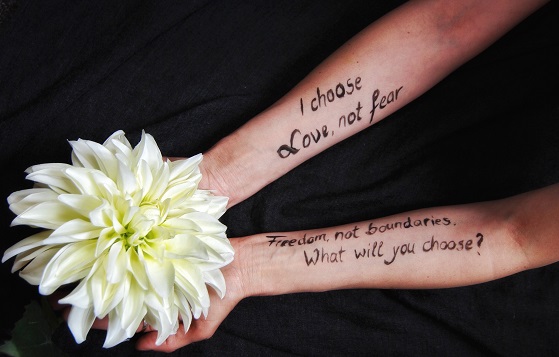 ‘Women across Borders’ is a global awareness campaign, shedding light onto the issue of sexual violence around the world. Photographer and executive producer, Stephanie Koehler, traveled to various Balkan states in 2015 to interview female survivors of sexual violence and experts in the field. Part of the campaign is a personal message from each survivor that is captured photographically. Her findings will be published in a series of articles documenting the stories of women in each of the countries she visited.

Read her article on Bosnia-Herzegovina.

I met Aleksandra in Zagreb on the very first morning of my Balkan tour. I found her to be a very inspirational woman in her 40’s who had recently published a book about her experiences growing up called The Stepfather and the Bastard. Starting at the tender age of 4 1/2, after her mother met her alcoholic stepfather and quickly married afterwards, she endured countless (and almost daily) cruel beatings and extreme emotional abuse. Her mother had five children with her stepfather. They divorced after their first son was born, but continued to stay together and produced four more children. It is not uncommon for victims to be lured back into an abusive relationship after the abuser promises to change. At the age of 13, Aleksandra was raped by her stepfather, and he threatened to kill her if she told anyone. The experience left her with very graphic nightmares. Eventually she did run away, and informed social workers about her life at home, but omitted disclosing about the sexual assault. It was not until she was in high school, at age 18, that she broke the silence. She recalls: “Before, I was too afraid to speak. And also, when you are a child who was abused every day, you don’t make a difference between sexual abuse and other kinds of violence.” When she finally realized what had happened to her, she entrusted her aunt with this information. She also tried to confide in her mother, but her words fell on deaf ears. Although her biggest supporter today, her mother will still not speak about the past. It seems that the scars are too deep for her to revisit those tormented years.

In our interview, Aleks recounted numerous brutal incidents. In one particularly harrowing episode, she ran to the police station covered in blood and with a broken leg; the police officer sent her away, suggesting family problems should be discussed at home. She then ran to an aunt 6 km away, who then sent her to the next aunt another 20 km away. Eventually her aunt involved social services. She had to confront her stepfather, and was to be sent back home with him. Fortunately, her breakdown at this event prevented that, and she was granted to live with her grandmother. Her siblings had to remain in the family household. She was able to free them at age 19.

Just like in other Balkan states, Croatia has no reliable national statistics of domestic and sexual abuse; it is generally believed that every 3rd woman and 7th man will have had experiences with sexual or domestic abuse in their lifetime. Given that this, too, is a patriarchal society, the numbers of unreported assaults are likely many times higher. According to the 2009 Country Reports on Human Rights Practices: Croatia,   Bureau of Democracy, Human Rights and Labor, U.S. Department of State, published on March 11, 2010, “Sexual assault is an underreported, endemic problem. On average, 100 to 140 cases of rape are reported annually in Croatia, however NGOs estimate that only one in three rapes are reported. Women often do not report rape because of a lack of knowledge of the law and the protections provided, because of feelings of shame or fear of reprisal, or because of fear of economic consequences in cases of spousal rape. There are major problems in the handling of sexual assault cases, including the inconsistency of victim support services, especially in rural areas.  Only police are allowed to have rape kits, often resulting in double examinations — one by police for criminal evidence and a second by hospitals for medical treatment. Also, the wide range in sentencing terms (from one to fifteen years) has resulted in lenient sentencing in most cases of sexual assault. Another major concern in legislation surrounding rape and sexual assault is that force or threat must be present to determine rape — lack of consent is not legally sufficient.”

Aleksandra was blessed to have wise women in her life to support her. In times when she was possibly going to make bad choices, their guidance helped her overcome obstacles. She recalls a conversation with one of her teachers, in which she said: “I wished I would have never been born.” Her teacher asked her to never repeat this, and told her that life is extraordinary for each of us. “We have to try to find our own light,” the teacher advised.

Aleksandra said that looking at the pain others experience, and not focusing on her own trauma, helped her to grow from a victim to a survivor and heal her own wounds. Yoga and meditation were, and are, the tools that support her on her healing path. Her transformation was remarkable.

In 2014, she met a 10-year old autistic boy at an event held by a foster care organization she was involved with. His life story was very painful to learn for Aleksandra. She was informed that he was especially shy, but their eyes met briefly. It was the look in his eyes that motivated her to go public with her own story, and to do something for children. She finished writing The Stepfather and the Bastard in two weeks’ time.

Aleks encourages survivors to break their silence and not to be afraid. She says that the obstacles of fear are hard to overcome, and many women don’t know how to escape. There are many organizations in Croatia, but no national umbrella organization. Each region has its own, and it is hard for women to leave the area they live in to be safe. The few shelters that exist do not have enough capacity for women in need, and Croatia has a very slow court system with processing times of 3-5 years per case. However, Aleks has been an inspiration to many, and has received feedback from women and men who are, or were, in similar situations. To hear her speak and share some of her values touched me deeply. Her soft and compassionate heart shows through so beautifully, and the clarity in which she can describe her mission is awe-inspiring.

She has amazingly transformed her life to be a spokesperson for those who are unable to stand up for themselves. Today, she is also running one of the biggest animal shelters in Croatia, where she ensures that abused animals, too, are rescued and given the safe home they deserve. Seeing an animal’s fear turn into trust, and then zest for life after finding a loving home, is the greatest gift to her, and ignites her compassionate heart.

I have learned so much from Aleksandra. To have endured such brutality, and be the light that she is with such deep wisdom, is mind-staggering. She so beautifully combined fierce compassion with tenacity and action. And it is clear to me that we as women must unite through such trauma, and be instruments to ignite social change. There is no doubt in my mind that she will bring about significant change in Croatia. Aleks holds a special place in my heart for being the first woman I interviewed internationally.

What will you choose?”

A special Thank You to my dear friend Suzanne Romero for holding the space, freely giving her emotional support, and for accompanying me on this path to be a change agent for Women across Borders.

Stephanie Koehler is a journalist and photographer residing in California. Her goal of ‘Women across Borders’ is to unite women all over the world to document the pain they endure as a result of sexual violence and the healing approach they take to grow from victim to survivor. Her work started in the U.S. and took root in form of interviews with women in various Balkan States and Germany. Her articles include photo essays of female survivors, and are platforms to tell their story. Her former work can be read on The Women’s International Perspective. Stephanie’s vision is to grow this work into a global sexual assault awareness campaign.