That Girl Is An Athlete. 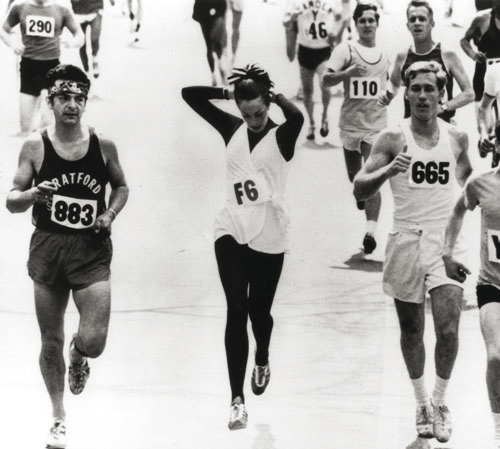 That girl is an athlete. She eats hills for breakfast, and adds miles to her miles because she can. She’s fit.

She spits when she runs, because she’s strong and she doesn’t care. She throws punches in the air. That girl, the one you see cruising by, the one with the sticky, sweaty hair, she’s going the distance. She’s going for speed. She’s an athlete.

She lost a few pounds last year. It was the toughest thing she’s ever done. That girl, the one approaching 50, who almost gave up, she’s training for another race.

Yes, the girl who couldn’t run a single lap without stopping, without gasping for air, the one who thought she didn’t have a prayer — is now a dedicated runner who trains for races. You heard me.

So here’s the thing…

Don’t be angry when she doesn’t want to lounge on the couch and watch TV. She’s already put in a lion’s share of couch time. If couch time were a sport, she’d be on the podium accepting the gold medal and making a speech. She’d have a house on Block Island if she could bill for all the hours she’s spent on the couch.

When she says, No, thank you, please don’t beg her to have just one bite. Kindly refrain from informing her that it’s okay to live a little. And don’t shake your head or roll your eyes when she says No. Don’t act like she’s no fun. Because saying No hasn’t been easy for her.

She has carted Yes, please, more on her body for years, through both pleasure and tears. Her Okay, sure, one more was piled like luggage, over-packed, wracked upon her back.

What you don’t realize is that she finally knows what she’s doing with food. After years of trying and failing, she knows when to say No. She knows why and how to say it too. And that girl, the one I’m talking about, she has to say No a lot. A lot more than you think she does. But it’s not your fault. You just want her to have fun.

But these days, her fun doesn’t come from a steaming bowl, or a buttered roll. It’s not perched seductively upon the end of a fork.

So when she’s at a restaurant, please don’t ask her what she’s allowed to eat. She’s allowed to eat anything she wants. Because she’s in charge, not you. When she feels like people are keeping tabs on her, it actually feels like they are waiting for her to make a mistake.

They are used to it, it’s true, and God bless them because they don’t want her to fail again. But, the watching does chip away at the cemented wall of resolve she’s worked so hard to build up. Resolve is not an easy thing. Don’t chip away at her wall. Just enjoy your pork chop and leave her alone.

Because that girl, the one who wouldn’t let go of old habits finally did. The girl who took the long way around, the one with the red face, the one working on her pace, the one training for a race — she’s dealt with her shit. And now? Now she’s an athlete.

Kimberly Valzania practices mindful gratefulness. She feels creatively driven to write about and share her personal experience and opinion on weight loss, fitness, life changes, adventures in parenting, day-to-day triumphs (and failures), and the truth-seeking struggle of simply being human. She believes that life is indeed a journey, and that precious moments appear (like magic) when you surrender, hold hands, and fling yourself into the great, wide, open.