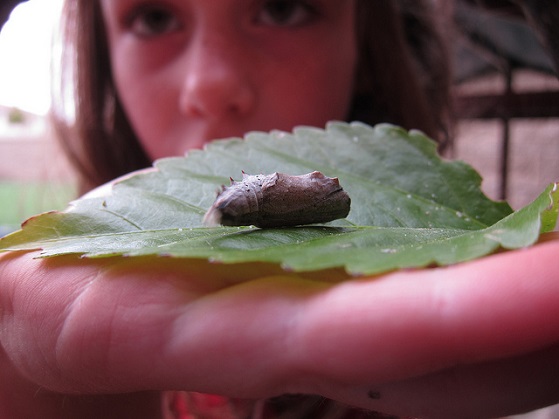 “Who Are You?” said the Caterpillar. ~ Alice in Wonderland

At times, inspiration can feel like something of a tease.

Whispering sweetly into our ears, enticing us to engage with it in a most playful manner, ushering us into a state of unexpected creative splendor. And then, just when we have cozied up to our new companion, it vanishes, leaving us in a slow moving state of disappointment and stagnation.

Haven’t we all felt deserted by inspiration at one time or another? Doesn’t it always leave us feeling stuck and unable to move forward with our creative endeavors? This, I believe, is one of the most dangerous and vulnerable, but also thrilling, times for our creativity to be in process. Why?

Because it is the very time in which the virtues of patience and trust must be called upon, and if they do not answer, then we run the risk of abandoning our creative potential, the same way inspiration has supposedly abandoned us.

I credit one very curious caterpillar for imparting me with this knowledge. We crossed paths 21 years ago, when I was just seven years old. Smitten from the start, I had taken him home with me to live in his very own bug bottle. Acting as my insect escort, he accompanied me to birthday parties and naturalist excursions.

He was the best travel partner, that was until I fell asleep, because when I awoke he was gone. The playful fuzzy charming creature I had come to know and love had disappeared. In its place was a tiny cocoon that looked like it was spun out of white embroidery thread. I was devastated.

My parents tried to console me by reminding me of the metamorphosis process, and how lucky I was to be witnessing this stage of the cycle. Or more importantly, that I would soon get to meet a butterfly.

So once again, I dragged that bug bottle all over town, only this time with a very still specimen. For some reason, my cocoon companion did not receive as much positive attention as when it was a caterpillar.

Children in my neighborhood warned me that I might not have a beautiful butterfly on my hands, but actually an ugly moth, or worse a gypsy moth, which were known tree-killers. Terrified by the possibility of raising a winged monster that would grow up to be a devourer of forests, I looked to my single encyclopedia for help.

My research did not reveal much (as it only contained two pages on metamorphosis), but it was enough to have me believe that I might indeed be the guardian of a tree-chomping creature.

Days passed as I grew more and more fearful of what my cocoon would become — something possibly dark and unlovable. Finally, I traded fear for impatience, and convinced myself that the cocoon was never going to hatch.

At worst it would transform into something despised, at best it could serve as scientific evidence, proving my theory that this cocoon had no real future.

I then proceeded to do the unforgivable.

I removed the unsuspecting cocoon from its sanctuary, picked up a plastic fork, and attempted to dissect it. Green goo oozed out of the once tightly knit cocoon. I was right! There was no sleeping butterfly or moth waiting to emerge, there was just green stickiness. My theory was correct. The cocoon was, in fact, a dud.

As I got older, that single memory would come to grow wings, flying to the front of my brain at the most inopportune moments — namely when I reached a point of feeling stuck in regards to my creative work.

With a flutter designed to haunt, that memory travelled with me well into adulthood, until certain technological advancements such as the internet allowed me to expand upon my original research.

What I discovered is that what rests inside a cocoon or pupae isn’t a fully formed sleeping butterfly, but in fact a nutrient-rich goo, comprised of digested body parts, memory-storing neurons, and imaginal disks.

I realize that all of this vital knowledge cannot undo the damage done. It will not bring my shapeshifting companion back to life. It may not even rid me of the guilt I have long carried for disrupting another being’s natural creative process.

But maybe it can help those of us who do feel plagued by impatience, fear, and uncertainty in regards to our own creative unfolding.

As one who, in all her innocence and ignorance, denied another’s right to grow into the unique thing it was destined to be, I beg you to never do that to someone or yourself. Please, do not let your fears, about what you or another will become, crush the divine mystery that is held within.

Masterful at disappearing and then reappearing, the caterpillar is the great Houdini of the insect world. It knows that the most magic is transpiring when nothing appears to be happening at all. So wait. Even just a little longer. The survival of your creativity (in its many glorious stages) rests upon your patience, your devotion, your trust.

Michelle Price is a swimmer, siren, and sea serpent who calls upon her favorite elemental muse (the water) for inspiration. She presses her pen to the paper and waits for the ink to flow; she will not rest until she sees waves. When a hurricane of emotions hits, she stands on the shoreline, taking inventory of all the things that were suddenly swept away. She records what is wrecked, what is gone, and what remains. She is the barefooted explorer who dances between pieces of broken glass, trying to retrieve any traces of treasure. She believes in the power of art to bring to the surface that which has been buried deep below. When we gain the courage to free ourselves from forces that hinder our true creative expression, we begin the healing process. Be it pen or paintbrush, she honors all the many different tools of healing humans chose to be reminded of our true divine nature. Michelle devises creative content for artists, health professionals, and creative entrepreneurs. You could contact her via email.