The Society Of Alice: You Are Your Own White Rabbit. 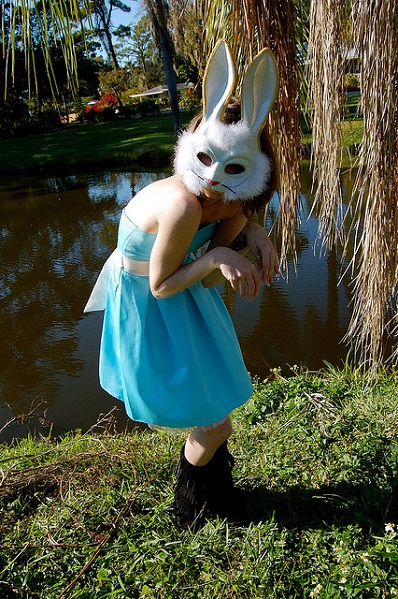 Sometimes we receive invitations to explore or wander unexpected territories.

In some instances, we seek out or call our adventures to us. The following was inspired by the tension birthed by an exchange I was having with a friend about crossing over from friendship into something more.

The lit screen of my outdated phone signaling the new text that I’d missed that night. At this particular moment, it was close to midnight, and after many messages exchanged, one final one read,

“I want you to think tonight about how far down the rabbit hole you want to go.”

The sight of this message encouraged a coy and knowing smile that threatened to deepen the laugh lines around my mouth. I wondered how he knew who I was.

The bigger question was whether or not he was going to be my White Rabbit, my Mad Hatter, or some other character who was soaked in the delusion that he was in fact inviting me to the rabbit hole.

Let me rewind a bit. I adore Alice in Wonderland. Sure, on the surface, she is a character who ventures into another world full of talking rabbits with vintage watches, Mad Hatters hosting tea parties, caterpillars who smoke hookahs, singing flowers… you already know the story.

Some would suppose that it was one bad acid trip for Alice, but I still remain in fascination of the magic and power that Alice holds.

I am in awe of Alice not because of her adventure into a universe where everything is as it shouldn’t be. No, the connection I have is more primal than that.

I am affected by the story of Alice in Wonderland for all of the ways that Alice has essentially taught us to surrender and enjoy the trip down the rabbit hole, even when things get really crazy.

I am of the idea that we are all in fact Alice, or could be her if we took ownership over the lands and labyrinths of confusion that we build in our lives.

This is my message or manifesto for all of those who belong to the Society of Alice. To my group of misfits and rebels who dare to disappear into the world of their own creation and continue to wander unapologetically:

I have seen that lost, wandering, well-charted-voyage look in your eyes

I know that you sometimes believe that maybe you’ve fallen down.

You feel the hard ground beneath you and your fingernails show all of the signs of soil, dirt and scraping.

You bear all the markings of all that we wish to avoid — anything to not slide down the rabbit hole.

And it will remain that deep,

dark and narrow hole, until you realize that you in fact crafted it

Dug it with your own hands

As you settle in allowing this as an opportunity to let go.

Collapse within yourself so that you realize that maybe,

just maybe, you were never looking for your white rabbit.

you lit the match which enlightened what was supposed to be.

While brushing away the ash, making space for what is spinning — an incantation to yourself that started with

A surprise, and ended with an eventual whisper into your own ears saying

Surrender, it’s okay, and float instead of fall.

And the falling is only an effort to help you return back to yourself after the world.

Mistaken places with instructions attached upon their wrists

Kidnapped you, leaving pieces of you

Yet, you took all these things as invitations

as permission to get absolutely lost.

But do you have the courage?

And that you are the timekeeper

Your own White Rabbit

The cartographer of your own map

All will be right if you just allow yourself…

Shanta L. Evans-Crowley currently lives in Brattleboro, and frequently likes to cultivate her imp by dining on her passions of photography, writing, belly dance and whatever else tickles her fancy.