The Tide Turns: I Am The Water, Not A Body That Can Drown. 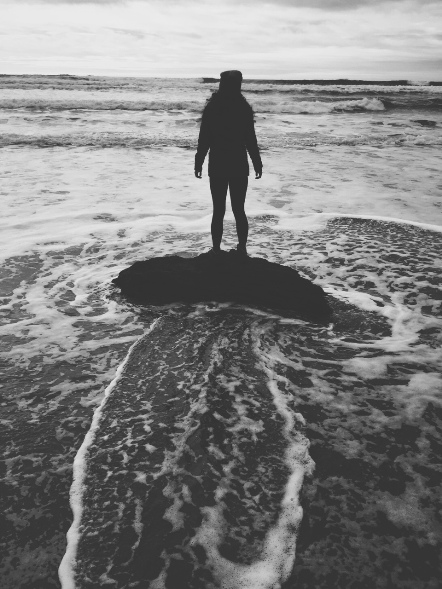 Today I fell in love.

It was in a moment of pure pain and exquisite grief that love made its move.

There had been a summer of shifting, a season of hope that had crashed and burned at my feet. The truth is, I knew that I had been treading water for many years.

Sometimes when things became rough and stormy, I would crash into My Rock; my body would slam against him and my searching hands would find a hold.

The sensation of his strength at my fingertips would cause me to cling to him. I always knew he would save me from the violent, black waters that churned about me. The abyss of life. He was familiar and he was Home. I had known nothing like the safety and peace I found with him.

We would be together, My Rock and I, alone in the endless, deep waters that would otherwise have drowned me or engulfed him. Sometimes I would grow brave, usually when the storms subsided and the waters calmed to a pacific lulling.

That was when I believed I was courageous and strong enough. It was then that I would swim away from My Rock, although often it felt as if he was floating away from me. I would swim up the sunrays, and laugh with the glints of light that reflected from the waters.

But when I was too far from My Rock, I would forget that I could swim, my legs would become heavy and cumbersome, slow-moving and panicked, as they started to thrash. My body, laden and petrified, would sink, and my arms would grow numb and incapacitated by the cold exhaustion of it all.

I would not survive; I would not live without My Rock. I did not want to. Ever.

At these times of drowning I would inhale the bitter brine, it would fill up my lungs, burning them, and my eyes would dim, so I was blind to anything but him. My Rock. And so, as I drowned, I would surrender to the great waters, and my body would once again slam up against him and I would cling.

That was my pattern. Our pattern.

But one day I lost sight of him. At a time I needed him the most, something happened that took My Rock away. A rip tide stole me from him. The undercurrent was strong, and I had no power.

While I had clung so desperately to My Rock, my muscles had atrophied and weakened, so as the current caught at my limbs, I was too easily torn from his strength. My Strength.

I did not realize it was due to the shift of the tide. This was meant to be, it was the way it must happen.

To begin with, there was denial. I found his shape in each swell of the water, swimming toward every one, only to find emptiness. Next came the cold. It crept into my bones and settled upon my heart, numbing all of my senses.

I continued in a pathetic hope, lost in a great ocean, swimming on with a blind and false faith that I hardly believed: That at any moment the waves would dip low to reveal the familiar peaks and troughs, the landscape of My Beloved Rock. My Strength.

Night and day, day and night would pass, and I refused to believe he was not close by. I knew he was out there, I knew he would be My Rock until the end of time, and I was sure, so sure that he would reveal himself.

Then came the pain and exhaustion. The grief that overwhelmed me, so I could not breathe, I could not move. I would drown without him. I wanted to drown.

Let the waters rush over me and engulf me, let the salt adorn my lips and my lungs, let the liquid fill my body and consume me, for what was the use?

But it did not bring me to My Beloved Rock as it had done before. He was gone from me. So I allowed my eyes to look one more time upon the bright sun, then they closed, my struggle ended, and I gave up the last vestige of life to the water and to death…

This is when I fell in love. As I surrendered to the black abyss, I was reborn.

She started to move and I felt her. As the water rushed in through my nostrils, as it filled my mouth and pushed its fingers inside my throat, that was when I felt the shift. I felt the flow. I fell in love.

She had seen me this far, she had been with me throughout this lifetime, and even now, as I gave in to the darkness, she was here. My body. My humanity.

The beautiful, wonderful, flawed ensemble of flesh and bone held me in her cradle of mortal life, and her flawed and clumsy power would not let me down. She carried me in this life with a dogged determination. She held me. Not now, she said. Not now!

Neurons in my brain fired, sending impulses to my muscles, which in their turn moved. As I started to swim and broke the surface, my brain had one conscious thought:

“Today you will live. You will live, and I love you! Today I am Your Rock. You, my love, are the water.”

It was as these thoughts entered my fragile mind that I remembered. I am not a body that can drown. I am the water. I am the deep, black ocean, and I am the waves that dance. I am the rain that falls from the skies, and I am the rivers that pour forth from the mountains.

I am the mist that rises in the valleys, and I am the waterfalls that crash and tumble, carving the cliffs.

As for my beloved, The Rock? He is no rock! The peak I had clung to in my desperation was only a tip that descended down, his root far below the surface of the ocean. He is the land, the terra firma, the stone, pebble and mud. He is the layer upon layer of compacted silt and sand.

He is the great mountain with his summit in the heavens, his foot upon the surface, his heart buried at the burning core at the center of the earth.

I could not lose him, how could I? My waves caressed his shores, my rain fell upon his lands, and his low terrain was my bed. I cannot drown, and he cannot ever be lost to me, for we are a part of the wholeness of this messy, beautiful, terrifying thing called life. But more than this, we exist beyond life.

Today I surrendered. Today I fell in love with my humanity. Today I found My Own Strength, and in doing so, I discovered that I need not cling, I need not grasp to something external in order to save myself.

For today I remembered that I am. He is. We are!

Verity Louisa is a weaver of words, a spinner of stories, a forger of fantasy and a wielder of wonderment. She is a fabricator of fables, a maker of magic, and a lover of legend. She is a creator of mess and of laughter, a crafter of tears and of tantrums. She is a woman-child who loves fiercely and drinks deeply from the cup, which bears the sweet nectar of the profound. She lives in a beautiful British Celtic county, and embraces life there with open arms, because its ancient rhythms pulsate and resonate through her.