Do Talk To Strangers: Close Encounters Of The Human Kind. 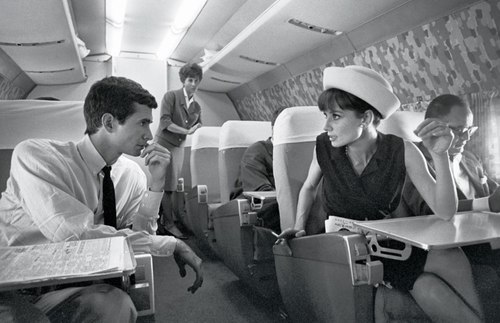 Humans are like islands. Some of us exist in large archipelagos, and others are lone dots.

Regardless of where we are located, some days we feel grand like the stunning Na Pali Coastline of Kauai, and on others,more like a desolate, windswept islet off the coast of Scotland. It’s days like this that we most need to hear news from other islands, whether we know it or not.

Most of the time, I think of myself as a sunny Caribbean Island — somewhere off the main tourist trail, but still connected and accessible.

But sometimes, I want to be a small isolated place where no one else visits.

It was during one of those days that I was waiting for a plane in a Don’t talk to me, I am not one of you moods, getting some last minute work done on my laptop.

Truthfully, I was using it more as a device to repel anyone who might have wanted to strike up a conversation.

As I boarded and walked up the aisle, trying not to thump anyone in the head with my bag, I scanned the seat numbers until I found mine. There was a man sitting in the middle seat.

Fuck, I thought, no spare seat.

As boarding concluded and there was still no one sitting on the window, I mentally cursed and wondered why the hell he didn’t go and sit there and give us both some space.

Then he turned to me and asked if I would like the window seat.

“No thanks, I prefer the aisle. Thank you anyway, you take it,” I suggested hopefully.

“You’ve seen one cloud, you’ve seen them all,” He replied good-naturedly.

I once again engaged my miniature pulley system and made the maneuvers of a smile, still feeling miffed that my desired personal space requirements were not to be satisfied.

He was fussing around a bit, I could tell he was going to be a Mr Have-A-Chat.

But the damage was done. He’d broken the ice, and try as I might to remain cranky, I was already beginning to melt.

Before I knew it, the boat had sailed on my antisocial mood. Contact had been made, and I was drawn into conversation despite myself.

Early in, turbulence of takeoff behind us, the conversation was at cruise altitude and I was along for the ride.

I can’t help myself.

I’ll hole up in a little stone cottage on that isolated Scottish island I mentioned earlier, feeling that I want to be alone… then someone will arrive in a little boat and offer to tell me a story and my resolve flies out the chimney as I fling open the door, sit down, put my elbows on the table, rest my chin in my hands and wait for the story.

Then I become so enraptured that I ask questions that turn the pages pretty quickly from the preamble and intro to the guts of the thing — the action, the mystery, the magic.

I knew about all the members of his family before we even crossed the border.

Then I asked him about his accent. It was English, and he was still annoyed with his father for moving them all to Australia. He’d longed to go back. But then years later, when eventually he did, it wasn’t quite what he imagined.

Did that make him feel kind of country-less? I wondered.

No, despite living most of his life in Australia, he was clearly still an Englishman at heart. He was proud of all his family members who had been to war, and wistful that he hadn’t served.

I found this curious, since my thoughts on war are so very different, but it was fascinating to hear another opinion that was simple, heartfelt and free from evangelical soapbox-iness.

He had a novel in his lap, so our talk turned to books.

He’d been a bricklayer most of his life, and hadn’t picked up a book until his retirement. Since then, he’d become a voracious reader.

“Have you read ‘The Girl with the Dragon Tattoo’?” he wanted to know.

It seemed incongruous to hear those words from a skinny seventy-something, white-haired fellow, with the remnants of an English accent.

I enjoy reading fiction, but this is exactly why I love a good conversation. The character development is unpredictable and delightfully surprising.

He was also a big fan of poetry, and had given all of his grandchildren books of it.

Growing up, his Irish mother, who was a big lover of poetry, had often said to him: “Be a man, my son.”

He hadn’t understood the significance of those words at the time, but years after her death, he discovered it was the last line of Rudyard Kipling’s famous poem If, and that it was her advice to him on how to live a good life.

I’d flagged a comment from earlier in the conversation.

He’d mentioned that his wife had grown sick of him.

I suspected they’d gone their separate ways, but he hadn’t mentioned it outright.

I hesitated. Was that going too far? Was that me being nosy?

I am that person at the dinner table who asks the questions everyone else wants to ask but doesn’t.

Maybe now you’re thinking I’m an insensitive busybody. Maybe I am. It’s just that I love a good story.

He didn’t skip a beat. He told me all about his wife divorcing him, seeming delighted I’d asked and given him permission to keep on talking.

They were in their 60s when they parted ways. He calmly told me she’d always been an independent sort who possibly hadn’t altogether ever enjoyed being a wife or mother. She’d been 16 when they married.

“She’d always wanted to continue her education, but had been too busy looking after me and the kids. When she left, she went back to school and eventually became a University lecturer. She was really happy doing that until she had to retire. Now she’s gotten sick and isn’t looking after herself.”

Up until this point, I hadn’t detected any bitterness. In fact, he had sounded concerned about her current state of health, so it made me smile when I asked if he wished they were still together and he politely answered:

“I hope this doesn’t sound too unkind, but I feel that she made her bed, now she can lie in it.”

The plane started to get bumpy, and there was a pause in the conversation as I focused on my nervousness. Ever since a bus accident in Africa a few years ago, turbulence has terrified me.

I mentioned it, and he launched in to facts and figures on airplane safety. I think he was feeling fatherly.

He continued chattering away, filling the space, trying to distract me.

He told me about a girl he’d gone out with before marrying. This girl had been a bit older than him, and was already earning a qualified accountant’s salary, whereas he was still in the middle of an apprenticeship, earning a pittance.

They stuck it out for a few years, but when she bought a block of land, it was the end.

He explained that back then, men were expected to be the protector and the breadwinner.

He seemed to be justifying it to himself.

I asked if she was the one that got away.

He laughed and said that she might have been.

“You should look her up.”

He laughed again, this time nervously like a schoolboy.

“Anyway, what do you do?” he inquired, clearly wanting to divert attention.

His eyes lit up.

“Would you tell me your name so that if ever I see one of your books I’ll be able to say, that’s the girl from the plane?”

He put out his hand, and introduced himself as Keith. I told him mine, and we shook.

“Well, Keith, you’re not getting any younger, are you going to die wondering?”

He looked at me seriously, and said, “You know, you’re right.”

Later, as we were saying goodbye in the airport, he pointed his finger at me and said, “Write that book.”

I pointed back at him and said, “Call her.”

Close encounters of the human kind inspire us back to life, and remind us that we’re not remote windswept islands. We are the highest peaks of a massive mountain range that reach up above the waves.

Do talk to strangers!

Leonie Orton is a blogger who writes intimate stories about life. She is also a freelance copywriter for businesses looking for unique, emotive words. When not writing, she’s teaching Yoga, playing with flowers, growing vegetables, exploring Earth, and adoring two spirited sons. You can get in touch with her via her website and Facebook, or sign up at her weekly blog.