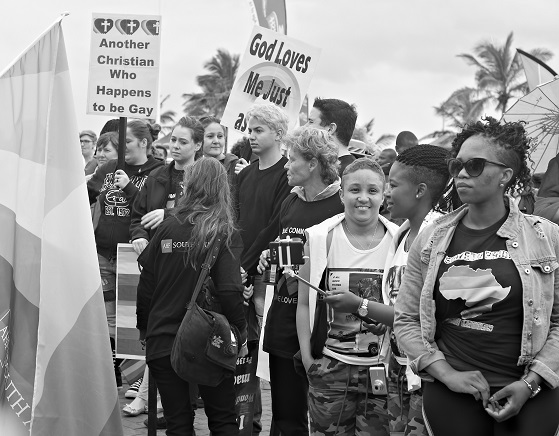 The old equations will fade eventually, enabling us to begin a new century, wherein the races will so mix until we can no longer affix our illicit labels. Sexism likewise will be disabled. Presently, however, we aren’t able. In fact, without our prejudices, many of us would be unstable. We need something to hiss at (and hate) to locate ourselves.

Thus we employ labels to promote fables that enable us to preserve our preference and our image. Consider, for example, how often before difference we become timid (and truculent), wanting to stuff it as far from sight as we often are from sense. “That’s just wrong,” we say in our defense. Part of the problem derives from how we describe difference.

We indulge deviations but not deviance, which is how we describe what divides from our view of morality.

The other part of the problem occurs because of our contexts. Herein we divvy up democratic privileges while holding theocratic premises. These premises preempt our efforts to determine what is moral and right from what is due and just. In doing so, we arbitrate rights via rudimentary reasoning. Meanwhile, deviations become deviance in our estimate.

North Carolina’s struggle with #HB2 is merely one of many examples that hampers our ability to build a beloved community rooted in a humane morality.

Issues of sex write the texts of most cultures.

In this community, theology is relevant yet not indiscriminate. It knows its origin and evolution, its historical character and contingency. Thus it serves without sanctioning what insults its sense. This theology embraces difference because of the significance of each person, even when resisting absorption into the moral mass, by seeking to express his or her individuality.

In fact, this theology celebrates difference, and reserves deviance for actions that breed calumny and destroy community, being intentionally inclusive.

Presently, however, we cast inclusion as incursion, erosion even, of our rights, obscuring radically their relativity. In behaving so, morality begets malice instead because of our inability to unwed unwise perspectives.

Theologically, life and morality are prescribed as they ought to be; democratically, however, they are described as they are based on unique expressions of our humanness independent of moral prescriptions. In ignoring these distinctions, we disturb our ability to build the beloved community.

In the beloved community, citizens seek understanding through spirited yet respectful dialogue, resisting temptations to deem deviant diversions from their paradigm. Instinctively, perhaps, they decry what they can’t discredit before being wedded to a higher wisdom.

They do so because they understand the difference between life in a liberal democracy versus life in a theocracy wherein absolutes marginalize opposition. They understand that each person has a right to self-expression, which must be preserved and protected. These citizens don’t deem moral relativity sin (or symbolic) of depravity, but rather as an opportunity to extend democracy.

They embrace the tensions endemic to democracy and characteristic of diversity in their efforts to build a beloved community.

Today, however, the idea of a universal, multi-vocal community is considered naïve by some people and anathema by others. So we engage piecemeal in patchwork, hoping to heal what refuses to die as if by some inner necessity, which we deem outward defiance. Sufficiently defiant, we accommodate its presence while envisioning its passing. Our attitude, though grotesque, is a critique of our conceit.