From Power to Power. 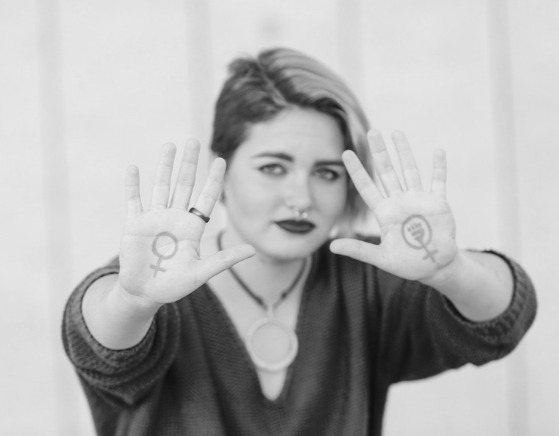 “Consent is sexy,” boasts the butt of a pair of neon green Victoria’s Secret underwear.

Phrases just like this one were printed on Victoria’s Secret Pink undies in 2012, when they posted on their website, “PINK loves CONSENT is our newest collection of flirty, sexy, and powerful statements that remind people to practice CONSENT — a verbal agreement about how and when people are comfortable having sex.” [1]

The first time I saw this anti-assault marketing scheme, I was elated. Finally, a way to promote consensual intimacy without sparing women their sex appeal. Finally, a way to get a message through to men that is direct but still sexy!

I was 17 years old when this consent line debuted.

This was a time in my life when I found myself being grateful when a man asked for permission to touch me. I found myself boasting to friends when a man didn’t go in for the kiss on a first date. What a gentleman! How rare it is to find someone who is not immediately entitled to my body! It is so hot when I am respected as a fellow human and not just a conduit of pleasure!

Slap a pair of “Consent is sexy” cheeky undies on me so that I can wear them the next time I’m in a situation where somebody forgets how sexy it is to treat me with a baseline amount of respect!

Wait… what? Consent is sexy now? What about necessary? What about imperative? What about absolutely-essential-if-you’re-going-to-touch-me? When did this become a bonus instead of an expectation?

This scheme thought up by Victoria’s Secret was clearly an attempt to improve the current state of affairs in the U.S. when it comes to assault, but what they did not realize was that their sexualized efforts played a direct role in rape culture.

“Rape culture” was a term coined in the 1970s by second-wave feminists who wanted to raise awareness of society’s normalization of sexual violence. [2] This term was originally meant to describe things like victim-blaming, coercion, and objectification.

These concepts are fairly straightforward and comprehensible to the general public in today’s world, as we enter an era of liberal thought and defiance in the face of old ideals. America is being confronted with its shadow, and this has brought a lot of stale, glaring issues into plain sight.

What most do not realize, though, is that rape culture can be found leaking through the cracks of even the greatest efforts to eradicate it. This is the way in which trauma operates: it can take any shape if it’s given the room.

There are ways in which society has yet to catch up with these insidious manifestations. That is not to say we have not made extraordinary strides in the realm of overcoming these age-old constructs. In fact, in the recent years, we have pointed out countless different flaws in the ways in which our society has been operating when it comes to sexual violence.

We have not remained stagnant in our progress, which is why this essay is a call to arms especially for those who have already begun doing the work: we have a ways to go.

And yes, we have already come a long way. We have addressed the innate issue that arises when we say, “What were you wearing?” and “Were you under the influence of alcohol?” We understand that this rhetoric inherently places blame upon the individual who has undergone the trauma. We understand that our first line of business is not to attack them again.

We have tried flipping the script; we have said, “Stop telling our daughters not to get raped. Start teaching your sons not to rape.” We have pointed out that she is not simply important because she is someone’s daughter, mother, sister, wife — she is important because she is someone. We have acknowledged the fact that rape and sexual assault do not happen exclusively to women.

We have shared enraged social media posts about Brock Turner, the 20-year-old white male student athlete who in 2015 was convicted on three counts of felony and sexual assault for raping an unconscious 22-year-old woman, and who was then released from jail after only three months. [3] We have read all of the stories. We have gotten loud. We have gotten angry.

Still, the trauma rears its ugly, virulent head as it parades itself through our efforts.

I cannot help but think that we, as a society, are not getting to the root of the only thing that would actually heal us. We have tried hate; we have thrown gasoline to the flames. We have started carrying around mini pepper sprays and brass knuckle key chains. We have risen in support; we have risen in protest. It seems to me that the only thing we have not risen in is power.

Power — the dirty word. The word that many see as rooted in greed, wealth, and thirst for prestige. The kind of thing that comes from brute force and the degradation of another. This is far from the type of power I am referring to.

In his book The Art of Power, Buddhist Zen master Thich Nhat Hanh challenges this stereotype by describing it instead as “… the power to be happy right in the present moment, free from addiction, fear, despair, discrimination, anger, and ignorance. This power is the birthright of every human being, whether celebrated or unknown, rich or poor, strong or weak.” [4]

This definition is preoccupied not with fame or wealth, but with what we as individuals can do for ourselves in the present moment. It proposes the release of anything that isn’t serving us, of anything negative that we may find ourselves identifying with.

This idea brings me to the next issue: From victim to survivor. This label shift, which at one point in my life made me feel so dignified and proud, has an inherent flaw. The wording is obviously striving to empower, to rebuild, to comfort. I understand and respect the work that this word is trying to accomplish — it is not an easy job to undo the sins of rhetoric’s past.

I have been in this place, and I fully understand why so many are still in it. I have courted the trauma to every high school dance. I have worn it like a medal of “Look What Made Me Strong.” I have worn it like a nametag. None of that was fulfilling. It felt like finding comfort in a familiar ache.

I will be damned if eight years after sexual assault, I still call myself by what happened to me rather than by who I am. I have come to realize that the most important and healing thing we can do is to call ourselves only by who we are. To say, “Do not call me by my trauma. Call me by my name. Call me by my birthright that is power.”

We are born into worthiness. We cannot be stripped of our worth: Our worth is defined by the mere fact that we exist.

We must remember that we are still as innocent as we were before we were ever even touched, before we took our active roles in the human experience. There is no one event in this life that can compare to the caliber of power that is the bare human soul.

When we come into that awareness, we are able to see what every single person around us is: a pillar of strength, a divine story that cannot be told by anyone but themselves. When we begin to see our fellow humans as brothers and sisters, we stop seeing them as threatening or weak. We stop feeling entitled or afraid.

When we step into our own power, our true power, we allow ourselves to see that fundamentally, we are no different from one another.

We stop believing that it is an act of kindness to treat each other like we are broken. We remove trauma from our introductions. Men stop living like apologies; women stop living like clenched fists. We can claim our masculinities and our femininities with pride, and allow them to complement each other. This is how we break the chains.

You see, it is not my mission to empower anybody. I cannot help but recognize that the word itself entails that power is being given instead of revealed. I cannot give something that is already the very basis of who you — who we — are.

It is my hope that if you have somehow forgotten this, I get to remind you. I get to stand witness to what it looks like when the people of this world start peeling back their layers and realize that we do not go from wounded to scarred. We do not go from victim to survivor. We go from power to power.

Aurena Green is a graduate of Christopher Newport University in Newport News, Virginia. She graduated in May 2017 with a major in Psychology and a minor in Spanish. She has been writing poetry and prose for as long as she can remember; the page was her first best friend and confidant. She has a passion for healing the world, and hopes to continue to devote her life to just that as she continues on her path.