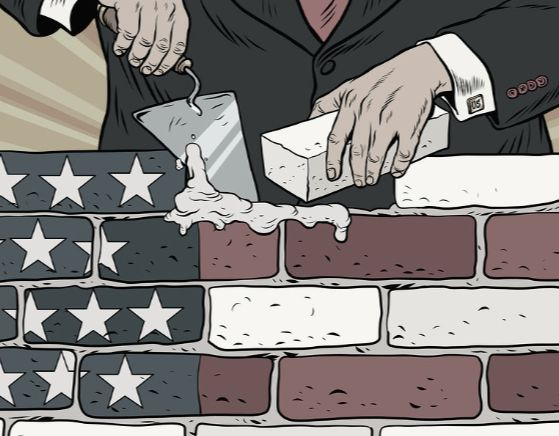 Herein we hold positions that hold poison and herald hate. Consider, for example, the pathological politics promulgated by President Trump and his troupe, which traces pathological elements of the American mind.

Seldom in our history have we embraced such foppery. Yet President Trump parlays his political brand to meet the demands of a demographic gravid with fears and fallacies. He uses the latter to spew banter that impeaches reason, wisdom and common sense. Yet his greatest achievement is more egregious, and reveals pathological elements of the American mind.

One need only consult the daily news for disheartening notes, how these denounce reason and morality. In this regard, the American mind is aspirational yet undisciplined, appealing yet repulsive, leaning towards the abyss without conscience or remiss, especially in the moral sense. Hence President Trump’s policies… and appeal.

Consider his firing of FBI Director, James Comey. Consider his exploitation of presidential prerogatives, issuing bans and briefs via Twitter without considering its implications or consulting his advisors. Consider also how his cabinet acts with indifference to national security. Comprised of deal-makers and dilettantes, President Trump’s cabinet encodes democratic imperialism.

Despite their abuses, he absorbs what would dissolve most presidencies.

President Trump’s ego exaggerates his fitness though we witness daily damning displays. By humor and hubris, citizens sanction what they would censure in saner times in keeping with the historical character of the American mind. Presently, however, the American mind is amiss and willing to risk what unravels when mishandled.

Meanwhile outrage fails because we disown our common humanity, creating thereby a culture of unreason.  Hence the practice of pathological politics.

President Trump’s approach is a logical progression of the pathology that follows perceptions of disenfranchisement, which is what his base feel because of the Obama presidency of the last eight years. Omitted, obscured perhaps, by it is the absence of political prudence. Thus, he provocateurs points while exhibiting a posture which fosters a superficial sense of political rationality.

Adolescent barbs and bravado underwrites his rationale when resisted on rational bases. Perverting the principles of real democracy, President Trump’s approach is brutish, boorish and thuggish.

It provokes rage, and provides a stage whereby supporters subvert democratic protest under the pretense of patriotism. Others employ violence instead. Consider the increase in hate crimes, and the renewed climate of racial hostility.

While President Trump may not be responsible for their response, he could show real leadership by discouraging their actions rather than justifying these with strident appeals to political fears. To his credit, his actions amplify citizen disgust with political approaches that siphon vital energies with exciting promises that end in anemic defenses of altered agendas.

President Obama excited similar energies in his rise only to be repelled by forces that altered his agenda and matured his presidency.

President Trump travels similar tracks with his promise to “make America great again.” Thus far, however, America’s greatness grovels before Russian interference and the President’s affection for its leader. Rightly regarded, his behavior betrays democracy. Even so, President Trump is unrepentant in practicing pathological politics. He persists because of the American mind’s affinity for democratic imperialism.

President Trump’s effect size is seismic. It is also a philippic of the American mind and its pathology. Yet political governance requires prudence, especially in a volatile age. Prudence suggests and requires temperance. Prudence forms in political fires, some self-set, others through arson, metaphorically speaking. Each, however, should breed wisdom.

As the chief executive, President Trump should be the chief protector of national security. Concerning this, his laxness loops Eric Snowden and reveals a tendency unique to humans and characteristic of politicians, namely, denial. Yet the times are too tempestuous to approve approaches that revoke discretion, whether in public debates or private discussions.

Indiscretion, in contrast, strains discussions and negotiations, especially when its claims are irrational. In this regard, President Trump’s manner diminishes diplomatic relations. In fact, it is more characteristic of the street corner than the counsel chamber wherein policies form and nations diffuse hostilities. Diffusing these shouldn’t compromise national security or democracy’s integrity.