There Are so Many Stories in the Threads of the Three-Cornered Flag. 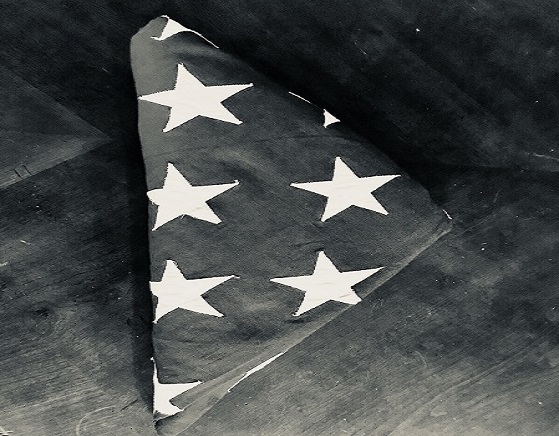 This folded flag placed in feminine hands
The soft cloth woven strong
How do we fold up our emotions into a neat little triangle?
Each star a memory, but so much blue, vacant, breath-holding space in between.

My sister could not come to the funeral, even though she really wanted to, needed to, in a way that I feel only she can truly understand. But she had the flu. She was so sick, and even though I was only eight, I understood already that when tragedy happens, sometimes our bodies become sick. So sick at this life and this confusion. I was quiet, I remember.

I need to tell her what happened in the three small flashes that I can remember of that day, and they feel fuzzy and sharp at the exact same time.

The first is seeing her sick in my mother’s bed and knowing that she could not go anywhere. And it felt so strange to leave her there. I worried about her so. Her birthday was one day after he died. This sick day was somewhere on a calendar, a few days after that.

The second image is of sitting on the front pew of our church beside my mother, on her left. I have no idea if this is where I actually sat, but my brother and oldest sister are somewhere in space and time, on that wooden pew, with the weird curve in it, so that you could not figure out how to position your back. I used to trace the edges of the pew and its smooth, woody grain for hours in that church.

I don’t remember ever sitting in the front row. But this was different.

The priest was talking about my Dad, and I was furious. Who was he to speak one word about my father who was not dead? He couldn’t be. I could still feel him. Who gave this priest any right to say actual words? It did not matter that the words were kind or loving or spiritual. I wanted to scream Stop talking, but that would not have been appropriate. And so my rage increased.

Isn’t it enough that this has happened? What is this whole ridiculous thing that is happening where the fact that he died is not a secret between Dad and us — the five of us that are left? Patti would not like this at all, the way the priest made my mother cry. Why was the deepest pain of my family being highlighted and shouted about for anyone to hear?

I could feel the people behind us in the non-front row pews, staring at the backs of our heads. “Stop staring at the holes in our chests,” I wanted to say.

And from there, I remember the casket being carried by men and boys, far too young to have to deliver the beautiful love of our lives to a cemetery. Heartsick.

The third icy memory flash — it was winter and cold. And I remember the prayers at a chapel cemetery (not inside, not outside).  These days, that memory is one in which I watch my eight-year-old self in a pink coat, that I do not know for sure was pink, and I look five or six years old, not eight. But I watch that little self frozen and speechless, standing by her mother.

The only sound is that of tears.

I am not even sure if we went to the grave. I think I heard that it was too cold that day. And I thought, Yes, everything is too cold. I look again and again at myself in that memory, but it is ever so hard to look at all of them, because that is when I break.

So, these are the memories etched on my soul that I offer as the only evidence from an eight-year-old to a just-turned 15-year-old, that a funeral actually happened. It is the clearest blur of my life.

My mother gave Patti the military flag from the funeral, in recent years. Patti told me that she had it for a while, and that because she was not at the funeral, she did not understand the depth of the ceremony surrounding the flag. She understood the depth on a very personal level for herself, but without having witnessed the ceremony, she didn’t know what she didn’t know.

That is, until she recently attended a military funeral and watched the flag ceremony. She was beyond moved.

She said that she does not know if my Mom gave it to her because she could not be at the funeral. As she said “She would not let me go,” her voice was that of a 15-year-old girl, who loved her mother and who was still accustomed to asking for permission to come and go (even if she was the child who liked to pretend that she was not asking permission for anything).

Sometimes, I like to think that the soul-flu saved her from the anger and shock that day. But that isn’t fair because I don’t know what her experience would have been. I know that we long sometimes for what we cannot do, even when it involves trauma. We long for closure.

But I can tell her now, that sometimes the closure comes in very odd ways, not during the societal ceremonies that are supposed to help create it — if it ever comes at all. None of it was fair to her. The real unfairness was death.

I got the flu the day after the funeral. I think it was because I felt so sad for my sister, and then I could lie in my mother’s bed and complain, and we could hold pillows on our stomachs together to try and make ourselves feel better. 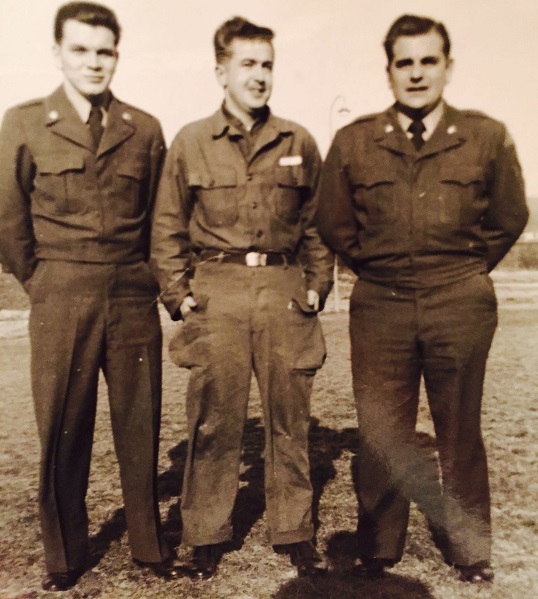 After that death, that time, that three-cornered flag, the wars only raged in our hearts and minds. According to the American Legion, every fold of a flag has symbolic meaning. The first fold is a symbol of life, the second fold is a symbol of our belief in eternal life, the third fold is made in honor and remembrance of the veteran departing our ranks. There are 12 folds in total.

So there are so many stories in the threads of this triangle tapestry. My Dad, a thread — a protector, a young soldier, and a Soldier of Life. All of those veteran ancestors who came before our Father and Mother are threads. The threads are woven together in our genes, you cannot separate them, even if you try. Threads for my Godparents and cousins.

There is a thread for my Uncle Jimmy, my dad’s big brother, this steely Irishman, who took my mother’s hand and helped her make arrangements that are absolutely impossible to make when the love of your life doesn’t wake up on an ordinary Sunday morning that will never be ordinary again.

I have three siblings, and they each have their own threads, winding back to this time. Theirs are theirs and mine are mine, some of the threads tattered by our flaws, but the threads all weave together into a soul-cloth of loyalty for each other. There are threads tied to each kind person who came through the halls of the funeral home to say goodbye to this strong and funny bear of a man that we loved.

There are threads of laughter and stories that my Dad brought to the kitchen table. The priest has a thread. I know that he and God are really okay with my eight-year-old’s rage. There are the threads that my Mom sewed to stitch our hearts back together, even if you can see still see the seams, sometimes.

Eventually you wake up enough times in enough mornings to press forward in some sort of strange way. As an adult, I understand the support being offered by those others who came to love us and to say goodbye. As a child, it was the greatest invasion of my privacy.

I hate to be exposed. This is why.

But even with that lifelong ache, you don’t give up when your grief exposes you. You don’t let it rule you, but you do honor it. This is the only way. This is the brave way. This is how flags are planted in the country of your soul. 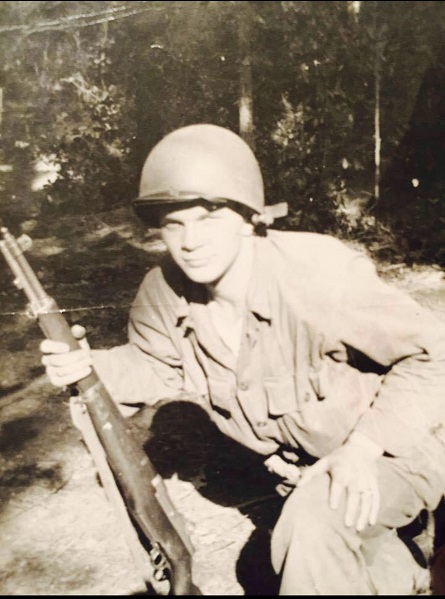 Maura Coyne is a seeker, a dirty wild horse girl, and a lover of the passionate life. She practices hypnotherapy, equine therapy and energy/breathwork to assist others in removing the blocks and obstacles that often prevent them from moving forward on their life path. Teaching others to transmute the heavy and dark challenges that they face, by moving them into the light of creativity, strength and spirit, she is committed to healing herself along the way, and witnessing miracles in Nature. If you are interested in a little soul archaeology of your own, contact her at Wild Goose Farm, named for her patriarchal Coyne ancestral line. She aspires to continue going on wild goose chases for the rest of her time on the planet.