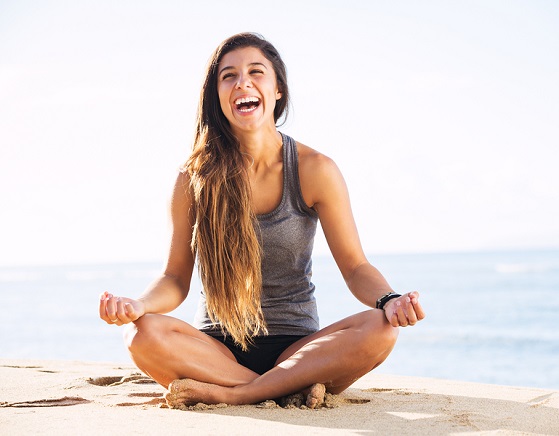 “I am thankful for laughter, except when milk comes out of my nose.” ~ Woody Allen

Yoga is a dead-serious-rubber-mat-hits-the-road adventure.

It is a rigorous undertaking when you are trying and trying to get asana poses just right, much less trying and trying to achieve the higher state of being the practice aims at. Meditation and its hardball goal of spiritual insight is a life-long commitment, not just the old college try. The concentration and stern self-discipline needed to get to moksha are no laughing matter.

Or is it really all that long-faced?

Since the mid-90s, a practice called Laughter Yoga has gainsaid the notion that Yoga is cold sober no-nonsense by the book and humorless. The brainchild of Dr. Madan Kataria, an Indian physician now informally known as the Laughter Guru, it is premised on the idea that laughing is good for you.

Their motto is a few ha ha ha’s are a boon boon boon.

What did the Yoga mat say to the yoga student? I will catch you if you fall.

It’s long been said that laughter is the best medicine. It strengthens immune systems, boosts energy levels, and protects from the damaging effects of stress. Laughing enhances blood flow, which is a factor in cardiovascular health. It releases endorphins, which are the body’s natural feel-good chemicals.

“Laughter is the tonic, the relief, the surcease for pain,” said Charlie Chaplin.

It’s priceless, and it’s free too.

Not only that, no matter whether it is real or feigned, it works. Although, if you’re laughing for no reason at all, you might need medicine.

“The mind does not know that we’re faking it,” explained Mary Wilson, a news reporter for ABC/Fox in New York who practices yuks. Dr. Kataria based his brainstorm on the concept that canned laughter yields the same results as spontaneous laughter.

“In Laughter Yoga, there is no need to wait until something funny happens. You can laugh intentionally whenever you want,” said Dr. Kataria.

When it’s real, it’s even better, as any belly laugh will testify. A new study at Loma Linda University demonstrated that adults shown a funny 20-minute video scored better on short-term memory tests than a control group. Their levels of cortisol, a stress hormone, were also significantly decreased.

“Learning ability and delayed recall become more challenging as we age,” said Dr. Gurindor Bains, the PhD candidate in Rehabilitation Sciences who led the study. “Laughing with friends or even watching 20 minutes of humor on TV, as I do daily, helps me cope with my daily stressors.”

The American School of Laughter Yoga promotes laughter clubs that are free and open to the public. “Thousands around the world volunteer their time to make them happen, freely and unconditionally, from the heart as an act of service.”

Laughter Yoga is practiced in more than 8,000 clubs and in more than 65 countries. “Laughter is the tool. Yoga is the end,” said Sebastien Gendry of the American School of Laughter.

Some people crack a Yoga joke and everyone laughs. But, some people make a joke of Yoga and laugh all the way to the bank, with wads of other people’s money.

Bikram Choudhury of eponymous Bikram Yoga fame was having lunch with friends when a cell phone on the table rang. He answered and put it on speaker.

Bikram: “Sure, go ahead if you like it that much.”

Woman: “I stopped at the Lexus dealership too, and looked at the new models. I saw one I really liked.”

Bikram: “Okay, but for that price, make sure you get it with all the options.”

Woman: “Great! I was just talking to Janie, and found out that house I wanted last year is back on the market. They’re asking four-and-a-half million for it.”

Bikram: “Well, go ahead and make an offer of four million. They’ll probably take it. If not, you can go the extra half-mil if that’s what you really want.”

Everyone at the table was staring at him in wonder and astonishment at his generosity.

Bikram turned and asked, “Anyone know whose phone this is?”

Bikram Yoga claims that 30 days of his Hot Yoga is better than Popeye’s spinach, will transform anyone, making them strong and buff, and those who say during steam class “Please, kill me now” have got it all wrong.

Laughter Yoga says a week without laughter will make a man weak.

“This stuff really works!” said Harry Hamlin, at the far end of hunkdom, about Laughter Yoga, after high-stepping the cha-cha-cha on Dancing with the Stars.

Others, like John Friend, the former founder and former chief guru of the former Anusara Yoga, think they’re laughing all the way to the bank until they find out it’s all a can of worms.

John Friend was praying to Krishna.

“Krishna,” he said, “I would like to ask you a question.”

Krishna responded, “No problem. Go ahead.”

“Krishna, is it true that a million years to you is but a second?”

“Well, then, what is a million dollars to you?”

“A million dollars to me is but a penny.”

The laughter of the gods is sometimes the upshot of setting yourself up as the arbiter of your own schemes. Some people say laughter is God’s blessing. Or, conversely, as Lord Byron put it, “Nothing can confound a wise man more than laughter from a dunce.”

Still others, like Jeff Briar, the founder of the Laughter Yoga Institute, laugh daily in their Yoga practice for the fun and friendship of it. A professional comedic actor for more than 30 years, Mr. Briar is a certified Laughter Yoga Teacher, and in 2006 was appointed by Dr. Kataria as an International Laughter Ambassador.

He has published manuals, written books, and shot videos, including Gibberish Sets You Free! Five Films on the Power of Talking Nonsense.

Comedians often have the gift of shtick, but Laughter Yoga posits chuckles and chakras as the joy cocktail, and a great workout too. “We laugh as a form of exercise,” said Mr. Briar. Want a toned tummy? Stomach muscles expand and contract when you laugh. A night at the comedy club can start you on the way to a rack of six-pack abs.

“Start laughing for no reason and watch yourself feel better,” said Mr. Briar on the Oprah Winfrey Show. “Laughter relieves all the negative effects of stress.”

What did the cat say to the other cat while watching their pet owners practice Yoga? Who knows how many years of Yoga, and they still can’t lick their own butts.

What did the man say to his friend about going to Yoga class? I’m down, dog.

What ran through the mind of the young yogi in Warrior Pose? Am I doing this right? Am I doing anything right? What is my life’s purpose? Am I happy? What do I want? Should I get chips for dinner? Is everyone looking at me? Do my boobs look weird in this top?

Standing on one leg in Yoga class doesn’t make you a yogi any more than standing in a garage makes you a car.

That’s not a joke.

T cells are white blood cells that fight infections and are the mechanism essential for human immunity. When you laugh, you activate T cells, getting them on the go from where they are stored in the lymph system. Biophysical research has demonstrated that belly laughing generates a negative pressure in the body that increases the speed and flow of lymph up to 15 times the normal rate.

“Believe it or not, a hearty chuckle can help,” said Dr. Andrea Nelson of the University of Leeds. “This is because laughing gets the diaphragm moving and this plays a vital role in moving blood around the body.” She stopped short of saying Take two aspirins, and go watch an Adam Sandler movie.

A woman reported her husband’s disappearance to the police. They asked for a description, and she said, “He takes an Ashtanga Yoga class every day. He’s toned, tall, amazingly energetic, with thick curly hair.”

Her friend said, “What are you talking about? Your husband is five-foot-four, bald, lazy, and has a big belly.”

The woman said, “Who wants that one back?”

A good sense of humor won’t cure everything that ails you, but giggles and guffaws are a great RX nevertheless. “Laughter can stimulate circulation and aid muscle relaxation,” says the Mayo Clinic. “A laugh fires you up and can increase your heart rate and blood pressure. The result? A good relaxed feeling.”

Laughter activates the body’s relaxation response. You forget your troubles when you’re laughing. “People who are laughing report being less bothered by the pain they do experience,” according to the Chopra Center.

No one wants to die, but everyone wants to go to heaven. The psychedelic painted school bus Ken Kesey and the Merry Pranksters called Furthur, painted in laugh-out-loud splashes, would be as good a way to go as any other.

A man arrives at the gates of heaven.

Another man arrives at the gates of heaven. “Religion?”

A third man arrives at the gates. “Religion?” “Jewish.”

The man says, “I can understand there being different rooms for different religions, but why must I be quiet when I pass Room 8?”

St. Peter says, “The yogis are in Room 8, and they think they’re the only ones here.”

The next men and women in line had to wait 10 minutes from here to eternity while St. Peter rolled around the pearly gates in paroxysms of laughter.

Edward Staskus lives in Lakewood, Ohio, on the northeastern edge of the Rocky River valley. Read more of Ed's writing at Paperback Yoga. Short stories and non-fiction are at 147 Stanley Street. The serial novel 'Slightly Unhappy Constantly' is at Slightly Unhappy Constantly. The serial biography 'Dogs never Bite Me' is at Dogs Never Bite Me. He edits PEI Theatre, the blog for the Professional Theatre Network of Prince Edward Island, which is at PEI Theatre.