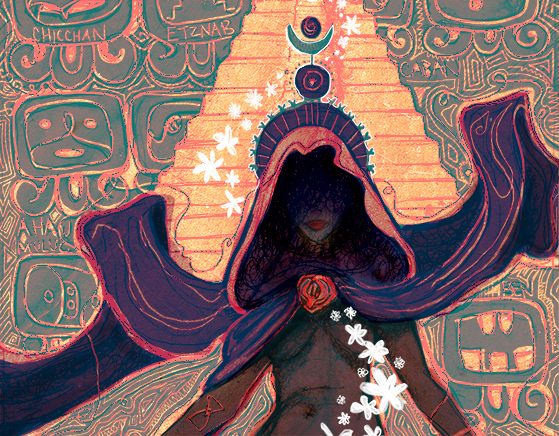 They were abstract and filled with light. Sometimes I’d recognize forms or people, but mostly they consisted of whimsical noises and ethereal imagery. The prominent symbol however, within each of these dreams, was that there was always an egg.

In some dreams the egg would be something that was being fed in its hardboiled form to people, usually manifesting out of nowhere, or it would appear as a giant, white, glowing light emanating in front of me on my path. Sometimes I was the one feeding and also eating the egg, other times I was simply the observer.

I later came to understand this symbol and these series of dreams as having to do with archetypes and symbology for the Feminine or rather, more specifically, the womb.

Little did I know that this theme would pervade in my life as a sacred staple. These dreams sent me on journeys the world over, where I soon started to learn about Her. At 27 years old, I was just starting to become fully fledged in the world, and it was here that I was introduced to the Divine Feminine.

I had found that She entered into my life once I started to realize I wasn’t what I had always thought myself to be. She supported me when I felt lost. You see, I was a late bloomer, so for much of my early 20’s I was unsure, insecure, and lacked assertiveness. But as I approached my 30’s, I realized I was something much stronger and more robust than I had initially given myself credit for.

Thus began the murmurings of my very own Silent Prophecy… whispering to me. Her voice was subtle at first. In fact, She’d started murmuring to me much earlier in my life, at about the age of seven, but for the sake of keeping it short and sweet right now, we’ll leave it at that.

Silent prophecy is what happens when your true truth enacts a mutiny over your programmed  (ego) Self and begins to take control of the ship. It bores into that textbook-programmed thinking person, and leaves her to be dragged through the grit and gravel (and likely some chollas) of her own creation, like having your leg caught in the stirrup of the runaway horse you just got bucked off of. 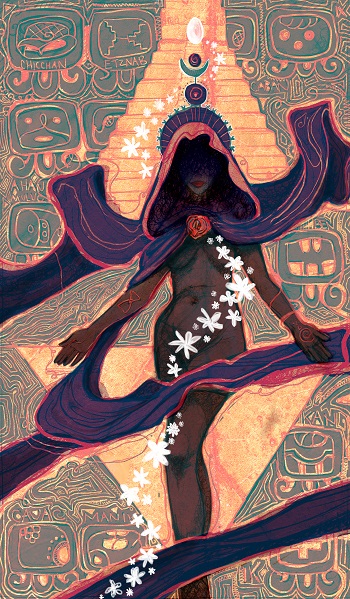 “The intuitive mind is a sacred gift, and the rational mind is a faithful servant. We have created a society that honors the servant and has forgotten the gift.” ~ Albert Einstein

There is a You that was born knowing, but likely got rather sidetracked by the popular narrative of society and culture, and in the innocent exploration of trying to understand who and what your purpose is here in life. It’s comforting to fit in, but that’s possibly not conducive to growth or adaptation in those times when it’s required.

Silent Prophecy might also be thought of as  fate or karma intervening. Things that happen to you that are beyond your control. Things that happen to you, not because you’re a victim, but because you are powerful, and are the subject in focus of a higher thing that simply knows better than you do and affects you in ways for your greatest interest, whether you like it or not, whether you want it to or not.

If you’re listening, truly listening, then you will come out the other side wise and powerful.

But at the time, when you’re in the thick of it,  it always seems unlucky or bad. Only in hindsight can you see that you were actually being protected. This is Silent Prophecy.

Your real truth. Not the truth you think is true, but the truth that is the true truth. The difference is like fact from fiction. The fiction part is usually the part that goes on in your head, feeding you things and stories that might seem like rational, ideal, logical, truth, when in actuality it’s dumping ill thoughts to maim and distract you from your absolute truth, stunt your growth and power.

The fact part is the true truth. It tends to be less recognizable to the Self, yet you undoubtedly, inexplicably know it’s You. The authentic you.

The catch is, true Truth is often harder to look at. It doesn’t fit nicely into idealism or societal standards. This Truth is usually harder than the fictitious one in your head, but it’s far more rewarding, healthy, and sustainable to Self in the long run. The Truth definitely does set you free. But you have to have courage to walk in it. It’s never comfortable but it’s always full-filling. Such a paradox.

True Truth is like the silent lioness who stalks from the tall and jungled grasses of your deeper, more visceral, core. You don’t really see her coming, but really she’s watching your every move. It’s a lot like in dreams when you are simultaneously the observer and the experiencer.

Then eventually, the lioness pounces with vicious precision, and unassuming, you can’t help but surrender to the death grip her clenched jaw has locked into your fictitious, vulnerable self, killing you (often slowly) to the you you always thought you were.

This is Silent Prophecy. The actual Truth of your Self — your untrained, untraumatized, unprogrammed, untarnished self — which you were born with, but forgot or brushed under the rug out of fear or shame (usually).

Once the lioness of your absolute truth pounces, there’s no going back to the truth you thought was yours. There is no more fictitiousness of the soul, and what remains then is pure authenticity, pure expression, pure feeling, pure actions.

Silent Prophecy usually speaks to us through triggers, dreams, or particular encounters in life that come to show you, and in those moments where you think you’re calm and collected.

When someone says something that gets you heated, that’s when you’ve been suddenly overtaken by your true Truth — the part of you that you keep controlled, stuffed under the rug. The part that you think is better left unsaid because you don’t want to risk that confrontation or that alienation… or annihilation? Of what?

When you boil it down, you’re really only afraid of losing the you you always thought you knew. Which is reasonable. Change and transformation is hard, just ask a caterpillar. And whoever triggered you, it likely wasn’t even their fault but rather perhaps something inside yourself that you stuffed long ago that was suddenly given a vent, and has festered up like a volcano under pressure.

You find that where once you had a trigger, now you have truth and peace. And the only reason that trigger existed was to encourage you to go deeper, so you could finally set yourself free.

Your Silent Prophecy which was once overlorded by the calamitous fiction of your very own head, that kept you locked in your trauma dramas and victim stories but had nothing to do with who you actually were, can now breathe life into your being. You are now released in beauty and vulnerability to the fullest potential that your Self came here to be. The highest level of your very own pyramid of consciousness.

No longer enslaved, but a malleable force of life fully embodied, acting with high integrity, and moving and creating and contributing in an abundantly thriving, ecosystemic perfection. 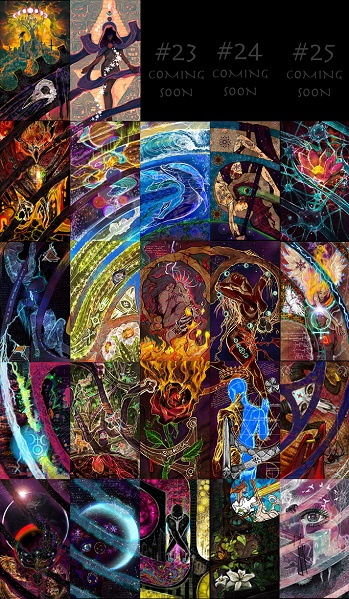 This is an ongoing series by Kristi Stout. Tune in monthly for the next chapter in ‘The Labyrinth’. If her art resonates with you, and you’d like prints, contact her through her website or Facebook.

Kristi L. Stout is an artist, mother, and lover. She considers herself a Renaissance woman, in service of Love in its many forms. It is her belief that inside each of us is our own sacred, Wild nature -- a hidden instinct that is not forgotten as much as it is dormant, like leafless trees in winter. It is the part of us that is connected to all things. A knowing without knowing. The part deep inside that understands darkness is necessary for the moon to simmer silver, and recognizes that even if you’re lost in the middle of nowhere you can always find a sacred somewhere -- like an internal compass pointing true north to your heart center. Her passion project, work in progress, is She Is Wild. You can find more of Kristi’s work here or connect with her on Facebook.