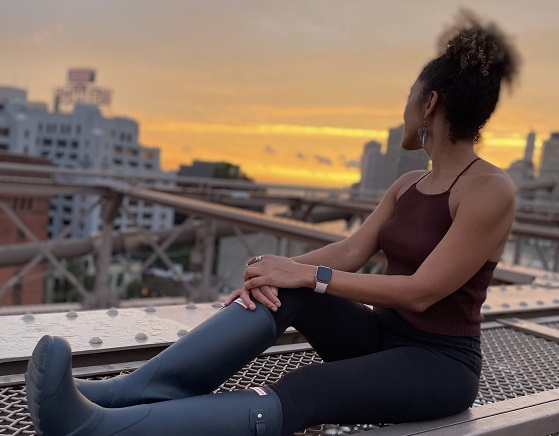 A couple of nights ago, in a moment of classic NYC spontaneity, I walked over the Brooklyn Bridge after work with my friend.

We had met to protest SB8 at Borough Hall, and decided to head over to the promenade afterwards where we were met with that stunning view of downtown NYC.

On this particularly beautiful early fall evening, Lady Liberty looked especially crisp and sharp against the backdrop of one of those sunsets that happens after it’s been raining all day, and then suddenly the rain breaks right at dusk, and the sky lights up, but ever so softly, like a Pissarro, all orange and pink and purple haze.

As we made our way to the bridge, we stumbled onto Brooklyn Ice Cream Co. and had to have a couple of cones for our trek over the bridge to the subway. And so we ate, and talked and exchanged multiple “wow’s” and “damn, it’s so beautiful’s” as we headed right into that unparalleled skyline immortalized in so many films, photographs and postcards.

That living cityscape with a rhythm and a heartbeat and millions of stories, dreams, and losses. That panorama that can pull at even the most cynical of hearts and provoke a mixture of melancholy, hope and possibility.

It’s been 20 years since that daytime nightmare occurred, and I still can’t look at that view without remembering those twin buildings, that old skyline, that morning, that year, and all the lives lost and changed.

It’s like ghost pain, but instead of a limb, it’s in your sense of vision; you feel you can blink and still see them there, which is why every year, on 9/11, twin lights shoot up over where the buildings once were. It’s both an eerie and comforting sight. A ritual that marries the material and the ethereal, grief and hope.

Not too far from the site, the Freedom Tower stands as a symbol of the perseverance of this city and its people.

The power of the NYC skyline is that 20 years after it was transformed forever, it is still evocative in its transcendence — in its exquisite holding of the pain of the past, and the promise of the future.

Which is why New York will never be over. The pandemic brought so much loss and fear as well as hardships, exodus, and crime. Not small or light things. But New York has been through worse. It survived the 70’s when the Bronx was burning, and the crack epidemic of the 80’s and 90’s. And the attacks of 9/11 were the ultimate act of horror.

Yet it’s still standing, like Rocky after all his fights — battered and bruised but all heart. Because the most surprising thing about New York is that underneath all that steel and concrete, it’s a fucking softy who loves everyone from the Wall Street dealer and wheeler to the corner homeless man. Who says, “All welcome here.” Who says, “Come and try your hand at that thing you wanna do.”

Who says, “There’s a place for you here, even if it is just staring at this view, letting your heart break and sigh out all its nostalgia and promise.” I don’t know any other place like that.

And today, like every year on the eve of this most painful anniversary, I remember and honor those who were lost, those who ran into an impossible and hellish scene to try to help, those who were left behind to hope and eventually grieve, and the collective grief that all of us who lived through that day and the years that followed still carry in our hearts so tenderly and reverentially.

Judi Checo (she/her/ella) is a Dominican-American writer, eternal student of life, and teacher and preacher of all things Spirit-related. She is a yoga and meditation teacher affiliated with Applied Psychology for Yogis, as well as a spiritual coach and energy healer. A die-hard New Yorker, born and raised in Washington Heights, she is currently pursuing her Masters Degree in East/West Psychology at the California Institute of Integral Studies (CIIS) with a special certification in Spiritual Counseling. You can find her writing and other offerings on her website.