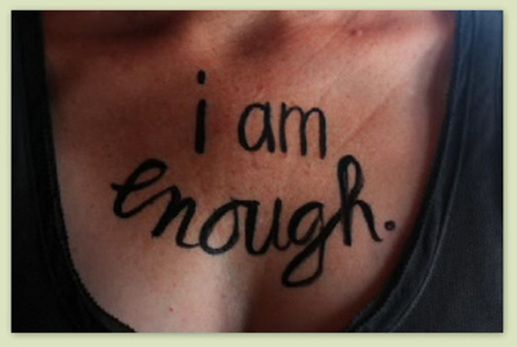 I woke this morning feeling sick, tired, low and heavy, as I have so many other mornings. I forced myself to sit up, to not go back to sleep and hide under the covers. I was planning to see a friend who I had not seen in months.

I considered cancelling. Not wanting to talk about the hideous months that had passed or to break myself open in front of her. But I had canceled a few times recently. I wanted to see her and I missed her.

I thought for a while about whether it was possible for me to sit and talk to her without really saying anything. I have been so good at this in the past, and I am still a master at it with so many others. But she is someone who has at times been such a support and a lifeline for me (and me for her) that our friendship goes beyond this facade.

Then I heard a voice in my head:

It felt wrong to me, so I fought it.

I was not consciously trying to fight it, but it was not a phrase that sat well with me. And I had no idea where it was coming from. The voice softened and was quickly forgotten.

I spent the afternoon with my friend. We spoke of her life, deeply. We spoke of my life, deeply in some aspects; and in others we spoke to a level from where I could then give no more. It was lovely to spend some time with her.

She gave me so much warmth, and I am now so glad that I did not pull the covers back over my head as I wanted to do this morning.

As I walked back in my house later, I felt tired. I had spent so much energy keeping up a partial guard and even more energy giving more of myself than I have done to anyone in a long while, more than I really had in me to give.

Then, as I slumped down into my familiar state of exhaustion, I was reminded of my morning affirmation:

This is what the voice was telling me as I tried to convince myself that I was not good enough or that I could not give enough of myself to satisfy our relationship.

I am now filled with a sense of wonder and awe at our own underlying knowledge that we are enough. I do not think it is just in me, I think it sits somewhere deeply rooted in each of us.

It is not a knowledge that I can consciously speak or even believe. It is a knowledge that is so lost within the dark pit of my being that even as I write it I do not believe the words that shine onto the page.

But this morning, when I was on the verge of sinking into a day of despair, my body, my mind, my soul, spoke to me — answering a question that I did not even know I was asking. Telling me that whatever I had to give to my friend, to our afternoon, to our friendship, was enough. Not too much, not too little. It was enough. I was enough.

Mariann Martland is a writer, a seeker, a lover, a friend. She is a woman finding her voice in a very real world where she cannot help but dream. She wholeheartedly believes in the Universe, love, connection and strength of human spirit, even when she is overwhelmed or confused by life; there is usually at least one moment in each day when she feels overwhelmed or confused by life. Through writing she dances in the dark and breathes in the light. More of her words can be found at Things I wish you knew, and on Facebook and Instagram.