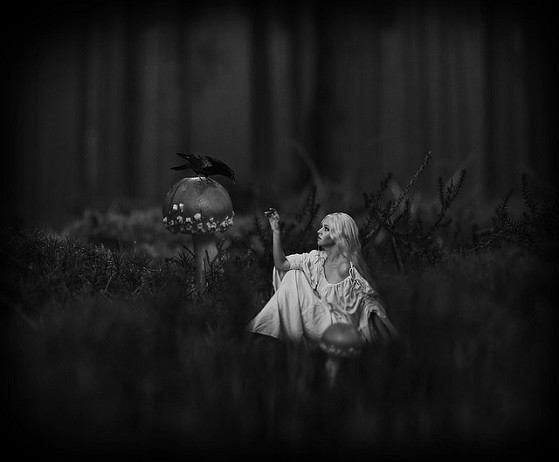 She knows where all the bodies are buried; she dug those holes herself, after all.

The jewel orange moon hangs full and low in the September sky, promising a good harvest. Then again, the crows are pecking at the scarecrow, and this is a bad omen. This wild woman stands alone and bare-breasted now, tightening her grip on the shovel and vowing to stay long past the Witching Hour if she must. She has to get them all, every one of them, for she can no longer sleep knowing they are still here rotting in Gaia’s ground.

Behind her, the funeral pyre is ready and waiting.

I have paid for the life I have now she affirms, slinging the shovel over her shoulder. I paid for it in blood.

A strong September wind tosses her untamed hair, and she knows it is time. This is the night of her soul-reaping, and she will be covered in the Witch’s war paint of dirt, sweat, ash, and blood before it is all over. Like an old cat on edge, she moves silently and ceremoniously to the seemingly barren field’s back corner, and her shovel strikes the stony dirt just as the crows escape, casting their black silhouettes against the rising, now pink moon.

The blackbirds do not want to be here for this, and she can hardly blame them.

She does not have to dig too deeply for this one; her shovel strikes skull almost immediately and before her arms can grow tired. A warmth at her heart-center warns she may cry, but she wills it away, invulnerable warrior woman that she is.

If you start with the tears now, you’ll never make it through she murmurs, casting a few more piles of loose soil aside and kneeling.

Her shaking fingers curl into the dirt easily, and she unearths her own soft, crumpled body. How peaceful she looks, this woman she used to be only a short time ago. She had not seen it coming, that one blow that struck her dead. The wild woman recalls the night she left the one who claimed to love her but kept her small, the one who used her and kept her bound with promises of happily-ever-afters and rose-scented fantasies.

This body hit the floor the moment she said no more, packing nothing but red lipstick and the holy wild in her bag, and leaving her too-small self behind forever.

She carries the self she sacrificed like a sleeping child now, whispering words of fierce support and maternal nurturing.

Sleep now, my love. Rest in the deepest peace. The life you would have lived would have been marked by countless betrayals and missed opportunities. Ashes to ashes… Her voice trails off as she lays her body down on the unlit pyre, knotty branches poking through her once perfect hair, and she returns to the field, this Soul-Reaper, this Witch-Harvester, this brave-hearted Jezebel.

One by one, she digs up more selves, each body covered with less flesh and buried far deeper than the one before. A body was left behind at every crossroads at which she stood over the years. Every pivotal decision made warranted an entire life-path be put into the ground and forgotten, but she cannot forget; these ghosts haunt her every day, whispering to her from the shadows of her psyche and begging her to ask the hard questions.

She digs up the body of the woman she would have been had she chosen to take the high-paying but spirit-sucking job; this version of herself was practical and poised, socially acceptable and well-trained. She had died the moment a wilder life of sacred work was chosen, but in her darker moments, when her roots are thirsty, the Soul-Reaper still mourns for this one. Still, she is dry-eyed when she tosses this body on the pyre.

The body she sacrificed when she chose to move away from it all, and the one struck dead by another choice to stay in a new place lay side-by-side; she digs them up together with a clenched jaw and angry eyes. She spits on them when she throws them on the growing pile, growling Good riddance and feeling her heart grow rawer.

She dreads the fifth body, now standing immobile and wide-legged with the shovel across her shoulders on this sacred ground, a statue of perplexed grief lit by a reddening moon. Crushing her eyes shut and listening to her heart-drum beat a slow dirge, she takes a moment to herself. When she finally moves again, it is a ceremonious body-prayer to all lost souls.

She digs with her whole being, plunging the metal deep with a pained face and white knuckles. She unearths the body of the woman she would have been if she had chosen to have the baby, and she can no longer force down the emotion; it erupts like an angry banshee, and she wails into the night. She holds this dead self close to her heart, rocking back and forth and muttering apology and justification in oscillating waves.

She wonders if this version of her could ever be vindicated, and she imagines the cold, pale lips whispering words of forgiveness as she lays her down with the others.

It is the Hour of the Witch. The moon is high in the sky now and blood-red. The Soul-Reaper’s naked body is covered in thick smudges of dirt streaked clear in places by the sweat of the harvest’s work. She is nearly finished, but her arms are heavy. The dimming of the warrior woman’s spirit is a painful thing, and this wild one is too broken to go on.

Her belly buzzes with a familiar but unwelcomed ego-softening, and she moans mournfully like a dying wolf.

A voice inside her — not the Soul-Reaper’s voice but another, softer tone — tells her to keep going. You only have one left, it says. Press on.

But it’s the deepest one she counters. The crows return on a shrill wind now, mocking the scarecrow and landing on its outstretched arms, and the wild one sees them as her dark cheerleaders. One left she affirms, standing.

The sixth body is buried so deeply that it takes her several seemingly endless hours to hit bone. She pauses intermittently to question who she is and why she has come here. She thinks about the ones she has loved and lost, and the ones she loves and still has. She ponders her shadow self, the merit of vulnerability, and other soul-deep questions from which she has run all of these years.

All the while, the Witch-Reaper digs, blood from her worked-raw hands fertilizing the ground and mixing with hot tears.

Surrounded by loamy earth she is when her shovel finally strikes the sixth sacrifice, and she wants to just lie down with the body and surrender to the elements. She dusts off the crown of the small skull and holds it up to her face, pressing her forehead to where her third eye used to pulse when she was a girl. This was the self she sacrificed so long ago, the version of her they all had wanted her to be.

This was the good girl who did as she was told, who kept her legs closed and her mouth shut. This was the girl who believed in a vengeful god, and was afraid of the dark.

The wild one gathers all the small bones, pausing to hold her own fragile hands for a long moment, and tosses them out of the deep grave one by one. This is the end, she thought. She did it. The Reaping is over, and now she can move on.

She carries the bones to the pyre, sobbing softly, and keenly aware that something drastic has shifted in her guts. Some great crystalline shell around her heart had fractured, some miraculous emerald-green glow was pushing through, and she feels another decision is upon her. She strikes her only match just as a scruff-feathered crow lands on her shoulder, and she asks herself aloud the pivotal question: Can I be wild and still love deeply?

The pyre blazes forth with such force that she stands back, red glow reflecting in her eyes as she watches all the versions of who she used to be ignite in a majestic sacrifice to her own divinity.

Every crossroads at which she has ever stood, every moment where she chose to self-examine, every choice over which she has agonized through countless sleepless nights; she reflects on all of these now, weeping in memoriam but not regret for the lives she might have lived.

Yes, she answers, howling into the bonfire. Yes! I have done good work tonight, so, yes, I can be wild and still love deeply. By the grace of my unruined spirit and holy, unmarred heart, I am wild, and I love deeply.

This Soul-Reaper is aware of a great crumbling under her ribs then, as the last of the shell around her heart falls apart, but then all goes black. Just before the immense, warm nothingness takes her over, she sees her own, loving face above her and hears these last words from her own lips: I love you. Sleep now, Hardened Priestess. Your wild soul has come home to rest.

Danielle Dulsky is a heathen visionary, Aquarian mischief-maker, and word-witch. Author of 'Seasons of Moon and Flame: The Wild Dreamer’s Epic Journey of Becoming', 'The Holy Wild: A Heathen Bible for the Untamed Woman' and 'Woman Most Wild' (New World Library 2020, 2018, 2017), Danielle teaches internationally and has facilitated embodiment trainings, wild circles, communal spell-work, and seasonal rituals since 2007. She is the founder of The Hag School and the lead teacher for the school’s Flame-Tender Facilitator Training and online coven, The Hag Ways Collective, an E-RYT 500 and YACEP, a Fire-Keeper for Ord Brighideach, and a dedicant to Irish-Celtic spirituality. She believes in the power of wild collectives and sudden circles of curious dreamers, cunning witches, and rebellious artists as well as the importance of ancestral healing, embodiment, and animism in fracturing the longstanding systems supporting environmental unconsciousness and social injustice. Parent to two beloved wildings and partner to a potter, Danielle fills her world with nature, family, art-making, poetry, and intentional awe.