I Am Who I Am Because Of You. 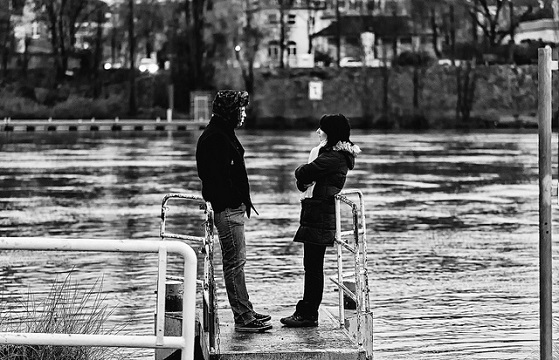 Before I met you, I was shy and unconfident. I was the type of person that would look at the floor while passing people in hallways.

I would try to say Hi but it would come out as a whisper. I would wait in my car until my friends showed up to where we were going. And I dated the type of boys who haven’t done much growing.

I don’t even recognize the person I was before I met you. She was weak, and she was way better than she thought she was. She was embarrassed about being smart, and didn’t understand why it’s a good thing to stand out. She had a lot of words in her heart, but she was too afraid to let them out. She was innocently naïve.

This is probably why you gave up so quickly into meeting me because I was so taken aback by you that sentences wouldn’t form. You tried more times than anyone else ever had, but when you gave up, I thought of everything I wished I had said. Somehow you still found your way to me — the rest of that story is history.

Now I am without you. I am the aftermath of you. The real me is the sparkling parts that fill the breaks of my heart that you left. The real me are the endless words I spilled out calling for a reprieve from the ache in my soul that you had caused. The real me is someone brave enough to look life in the eye and to finally speak.

I don’t want to give you credit for everything. It’s not as if you made me who I am, but you truly molded me into who I was meant to be. I was meant to love you only so you could break me. Only while I was completely broken apart would I find what I was meant to see.

I am far better after putting together the pieces, because I finally had to acknowledge every little part of me.

Before I met you, I would settle for things. I would be okay with ordinary, and shy away from extraordinary. I would let people talk down to me, and worry about being perceived a certain way. I would forgive with half of an apology, and grovel for things that were someone else’s fault. I had a full heart, but I had a ghost of a backbone.

You made me understand what love was. You made me wrap the idea around my head all the way to my heart, until it completely constricted me from breathing. Then when you let go of me, I finally had to breathe to see what it was like to love myself and not just you.

When you let go of me, I realized I could survive without you… or anyone.

You made me realize what it’s like to be loved and to be treated like someone who mattered. I wasn’t just an excuse or a hobby. I was your somebody, even if it was for a little while. You made me feel like I was on top of the world, even if you eventually pushed me off of it.

That’s the price you pay with heartbreak, but luckily, when I fell into the sea of despair, I taught myself to swim.

Regardless of how we ended and the mess that I became, you really did a number on me. I am someone completely different, and this is exactly who I was meant to be. I am no longer afraid. I mean, clearly, I’m writing about you years later for the entire world to read.

I am no longer fearful of the magic I’ve had, and now I want to share it with everyone.

Without that move, I wouldn’t have the friends I have, the life I had, the adventures and stories I’ve had. I’m not quite sure what I would’ve had without you, but I’m sure grateful that I do. So, thank you. Thank you for influencing me in the worst way by catastrophically breaking me, so I could finally see the magic in me.

I don’t even recognize the girl I was when I met you. So now I wonder, who would you have loved more?

Sonya Matejko is a blogger and freelance writer who is vibrantly falling in love with life in Miami and around the world. Her writing is featured on a variety of high-profile platforms and niche blogs. Her most popular article has been shared nearly half a million times on Facebook alone. Sonya writes about the dating world as well as traveling the world. She founded her blog as a home for hopeless romantics and wanderlusts. She believes passionately in love even if she hasn’t quite gotten it right just yet. Sonya steals lunch breaks and midnights to do all of this, on the side of her full-time advertising career, with the simple yet powerful goal of inspiring others to believe in love and to believe in themselves.