The Labyrinth: A Series of Art. {Part Two: The Sacred Feminine} 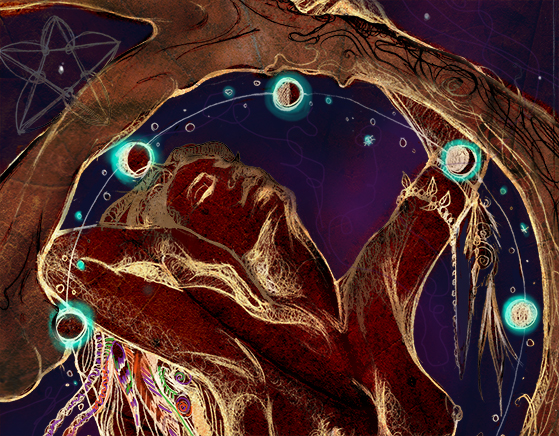 Following Hieros Gamos, shall we take our second step into the labyrinth by recapping a bit what we’ve encountered so far from Part One?

Within each of us is expressed both masculine and feminine energies that are enacted through the way we relate to the world, to life, and to lovers and others. We are physical vessels holding a more microcosmic dance of each of these expressions within us, just as we as individuals are within the one true expression of the Universe that is beyond us.

We must unite these two concepts in holy matrimony. Our very existence depends on it.

To do so, one very important component of this is the Sacred Feminine.

Every woman is sacred, and if she should choose to embrace that she is, she becomes a kind of bridge between what is physical and what is spiritual. For this reason alone, self-realized or not, her life can be complicated and hard to understand from the outside, or from the perspective of common thought.

That completed leg on her double-X chromosome is what I feel is the thread that places Her in communion with what is beyond this realm, like a spiritual antenna with the power to tune in.

Common thought tends to typically dismiss Her as hysterical, crazy, and/or over-emotional, but if She is any of these things, it is merely because She’s not being seen (mostly by herself), and doesn’t take kindly to that.

However, it is by this very route that we (as a collective) can traverse a sacred portal on earth to what is cosmic, Divine-consciousness — like an electric cord plugging into a power source, or the end of a grapevine producing succulent fruits, where its roots are far away from its reaching branches.

Sadly, over time, this vine of the Feminine reaching the cosmos has been belittled, demeaned, exploited, overlooked, beaten senseless, and diminished to almost a nothingness, so atrophied and unwatered. Like a shriveled limb no longer pulling sustenance in, and now our world suffers because of it.

She is the source of sustenance here, and as women, this is our Divine duty to remember this and uphold it. We are Her disciples.

As females, we have been distracted from Her by trying to compete with males and even other females, and now that we are on a strong course to achieving a space of equality amidst men, we must now venture deeper and search what is wildly, beautifully feminine within us. Because without wild nature, we have nothing. Do not take this last statement lightly.

Without nature. We are nothing, and Nature has had enough. She’s changing Herself to be less accommodating to the human, just as we as women have had enough.

Achievement is a masculine principle that we have honed and cultivated, and it has given us as women a voice in this patriarchal society. Light has now been shed on our plights and struggles and imbalances as women in this world, and all that we have had to hold and keep secret for the past millennia. Let there now be no more secrets!

Our secrets have grown too heavy to carry any further, and must now be cast aside as we step back into the light to brandish our true divinity. Secrets have no place in the light, and cannot exist there by design.

Through much effort and the sacrifice of our ancestors, we now have safety (in the West) to be a voice. Let us now use this gift (of being able to have a voice in this culture) and let us now speak in the sacred tongue, to live and uphold what is truly of value here in the world, and waiting for all of us to recognize it.

Humanity depends on women and our powers of compassion, nurture, and unconditional love (feminine principles) to be steadfast.

There is no stronger or finer archetype of Feminine principle in this world than Mary Magdalene, who was the feminine component of the Christ-consciousness, beloved partner to Jesus, who was a pure archetype of Masculine principle, to which Claire Nahmad and Margaret Bailey, from their book The Secret Teachings of Mary Magdalene so eloquently state:

“Although Mary Magdalene was not crucified on the cross, she was indeed crucified by the imposition of a mentality, a soul dysfunction, that stretched across the centuries and made of her an outcast and an embodiment of human weakness and degradation. She, whom we  should most have honored and revered, we called a whore!”

It is my belief that the Sacred Feminine is also the steward of the body. In other words, sex and our feminine sexuality is a beautiful, healing energy, which was given to us as a tool for finding our way back into embodiment with the Divine, when used and enacted properly, as Masculine and Feminine principles entwining as a physical representation of how life works and operates in its optimal form.

This sacred act is hosted and governed by the female. Pleasuring and pleasing herself first is her sacred duty as a woman, for it is through these things that she realizes how to bestow these rituals on the world around her so that all can benefit and be glorified in sanctimony, just as nature does in Her incessant giving of life, creation, and sustenance to the creatures that walk upon her face.

Her sacred duty is not to a man, but to helping men as a collective humanity become embodied here on earth. Like orienting to a cruising altitude in a difficult terrain of physical existence, where it’s easy to forget our empowerment and ability to fly.

It is She who reminds us to play, find joy, ecstasy, sensual pleasures (things that entice our senses, which embody us here) and to look for blessings, constantly holding insights to things that are beyond this world, particularly in the realm of what’s hard to define, like feelings and complicated concepts of love and others that aren’t comfortable being physically manifested.

What we cannot explain by science simply means it’s beyond science’s scope of understanding, but does not make it any less important or valid. We must take care not to forget this very valuable concept.

Presently this profound treasure of an ability a woman has, to bridge the complicated and nebulous, is scarcely accepted as anything worth anything. Hence the modern struggle of women, and why inevitably so many of us are more inclined to settle instead of claiming our sacred duty. Why fight an upstream battle when there is no support to do so?

All this power to give, with no desire to horde it, but nowhere to put it because no-body values what She truly brings, not in Her truest nature, which in so many ways She’s been forced to keep secret merely to survive.

“Until we as a planetary consciousness, retrieve Her, we are doomed to limp along with only half the ring of supreme consciousness available to us, no doubt wondering why, in our ignorance, our civilization should keep short-circuiting with such resounding regularity.” ~ Secret Teachings of Mary Magdalene

But I don’t think hope is ever entirely lost.

In actuality, what She is potentially, is like the iceberg’s hidden mass. What we see and experience is merely the tip of the iceberg, but the whole of it lies below the surface and goes deep.

In this case, the whole of what we are (as collective humanity) reaches outward and far into the infinite, but what we see and experience in the physical realm is like an iceberg in reverse, with most of what we (actually) are being enmeshed into Universal consciousness and as part of the cosmos. I know if you’re reading these articles I write, you have heard no doubt, that we are mirrors of the Universe.

Everything mirrors everything else, and when you fully grasp this concept, it’s like holding a secret key into peace and tranquility amidst an otherwise volatile existence. A way to always find true north when you’re being tossed in the tumultuous churning of this physical life that is constantly battering against our surface. 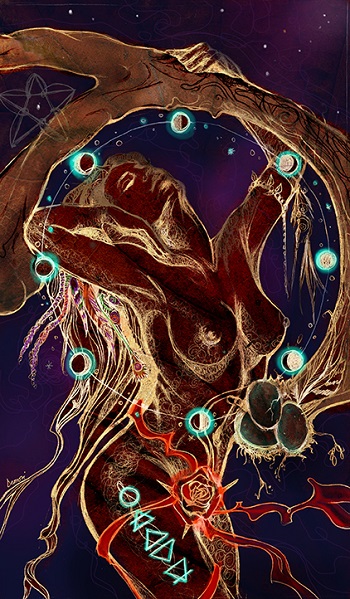 The fully-realized (anthropos) female is a key, but She has been condemned for centuries. Everything about Her that was trying to show men the path to Divinity was deemed sinful or witchcraft and therefore ungodly. Shamed.

If you ask me, the oppression of women for the past several millennia was really a giant jealous fit thrown by the unrealized male of the species, who was angry that he didn’t have her powers of insight and influence, nor could he handle rejection, or control his lust (as lust was never a feminine issue even though we were always blamed and then killed for it).

Lust comes from a place of control which is a masculine principle on the shadow side. His more graceful and authentic powers govern a different realm, and I’m going to delve into His beauty later, for He is not at all a tyrant at his core.

But thus, Her oppression began our collective disembodiment from Divinity. All you need to do is look at news headlines, to see how very dire our disembodiment has become. I see nothing of Her in any headlines across the world, and this is a severe problem we need to take more seriously. Our lives depend on it.

The only thing that will save humanity at this stage is to begin embracing the Divine Feminine within each of us, and that is why she is Part Two in the labyrinth, surpassed only by sacred union — the marriage of both components — which segues into what I have in store next as we walk further into my labyrinth.

“It is not a song fueled by the lower passions and appetites or by an outpouring of emotionalism, but by the sacrifice of the ego, that little earthly self which, with its demands and frets and self-importance, clouds the waters of the soul so that the light of spirit becomes difficult, if not impossible to see. When we will no longer give in to its dictates, our soul becomes poised in radiance, and the song begins.”

There is no such thing as evil, there is only ignorance and selfish agenda which are merely byproducts of human egos run rampant, left too long without Her influence.

Take my hand, our path is just beginning. 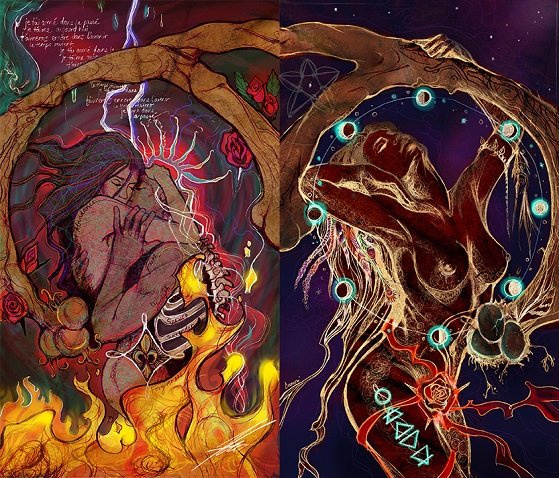 This is an ongoing series by Kristi Stout.
Tune in weekly for the next chapter in ‘The Labyrinth’.

Kristi L. Stout is an artist, mother, and lover. She considers herself a Renaissance woman, in service of Love in its many forms. It is her belief that inside each of us is our own sacred, Wild nature -- a hidden instinct that is not forgotten as much as it is dormant, like leafless trees in winter. It is the part of us that is connected to all things. A knowing without knowing. The part deep inside that understands darkness is necessary for the moon to simmer silver, and recognizes that even if you’re lost in the middle of nowhere you can always find a sacred somewhere -- like an internal compass pointing true north to your heart center. Her passion project, work in progress, is She Is Wild. You can find more of Kristi’s work here or connect with her on Facebook.